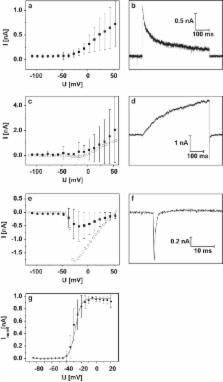 Elizabeth Hartfield,  Michiko Yamasaki-Mann,  Hugo Ribeiro Fernandes … (2014)
Human induced pluripotent stem cells (hiPSCs) offer the potential to study otherwise inaccessible cell types. Critical to this is the directed differentiation of hiPSCs into functional cell lineages. This is of particular relevance to research into neurological disease, such as Parkinson’s disease (PD), in which midbrain dopaminergic neurons degenerate during disease progression but are unobtainable until post-mortem. Here we report a detailed study into the physiological maturation over time of human dopaminergic neurons in vitro. We first generated and differentiated hiPSC lines into midbrain dopaminergic neurons and performed a comprehensive characterisation to confirm dopaminergic functionality by demonstrating dopamine synthesis, release, and re-uptake. The neuronal cultures include cells positive for both tyrosine hydroxylase (TH) and G protein-activated inward rectifier potassium channel 2 (Kir3.2, henceforth referred to as GIRK2), representative of the A9 population of substantia nigra pars compacta (SNc) neurons vulnerable in PD. We observed for the first time the maturation of the slow autonomous pace-making (<10 Hz) and spontaneous synaptic activity typical of mature SNc dopaminergic neurons using a combination of calcium imaging and electrophysiology. hiPSC-derived neurons exhibited inositol tri-phosphate (IP3) receptor-dependent release of intracellular calcium from the endoplasmic reticulum in neuronal processes as calcium waves propagating from apical and distal dendrites, and in the soma. Finally, neurons were susceptible to the dopamine neuron-specific toxin 1-methyl-4-phenylpyridinium (MPP+) which reduced mitochondrial membrane potential and altered mitochondrial morphology. Mature hiPSC-derived dopaminergic neurons provide a neurophysiologically-defined model of previously inaccessible vulnerable SNc dopaminergic neurons to bridge the gap between clinical PD and animal models.

Much more than a leak: structure and function of K₂p-channels.

Vijay Renigunta,  Günter Schlichthörl,  Jürgen Daut (2015)
Over the last decade, we have seen an enormous increase in the number of experimental studies on two-pore-domain potassium channels (K2P-channels). The collection of reviews and original articles compiled for this special issue of Pflügers Archiv aims to give an up-to-date summary of what is known about the physiology and pathophysiology of K2P-channels. This introductory overview briefly describes the structure of K2P-channels and their function in different organs. Its main aim is to provide some background information for the 19 reviews and original articles of this special issue of Pflügers Archiv. It is not intended to be a comprehensive review; instead, this introductory overview focuses on some unresolved questions and controversial issues, such as: Do K2P-channels display voltage-dependent gating? Do K2P-channels contribute to the generation of action potentials? What is the functional role of alternative translation initiation? Do K2P-channels have one or two or more gates? We come to the conclusion that we are just beginning to understand the extremely complex regulation of these fascinating channels, which are often inadequately described as 'leak channels'.

Constance Hammond,  Liliana García-Ortíz,  Bernard Bioulac … (2005)
Deep-brain stimulation at high frequency is now considered the most effective neurosurgical therapy for movement disorders. An electrode is chronically implanted in a particular area of the brain and, when continuously stimulated, it significantly alleviates motor symptoms. In Parkinson's disease, common target nuclei of high-frequency stimulation (HFS) are ventral thalamic nuclei and basal ganglia nuclei, such as the internal segment of the pallidum and the subthalamic nucleus (STN), with a preference for the STN in recent years. Two fundamental mechanisms have been proposed to underlie the beneficial effects of HFS: silencing or excitation of STN neurons. Relying on recent experimental data, we suggest that both are instrumental: HFS switches off a pathological disrupted activity in the STN (a 'less' mechanism) and imposes a new type of discharge in the upper gamma-band frequency that is endowed with beneficial effects (a 'more' mechanism). The intrinsic capacity of basal ganglia and particular STN neurons to generate oscillations and shift rapidly from a physiological to a pathogenic pattern is pivotal in the operation of these circuits in health and disease.

This work is licensed under a Creative Commons Attribution 4.0 International License. The images or other third party material in this article are included in the article’s Creative Commons license, unless indicated otherwise in the credit line; if the material is not included under the Creative Commons license, users will need to obtain permission from the license holder to reproduce the material. To view a copy of this license, visit http://creativecommons.org/licenses/by/4.0 Metadata associated with this Data Descriptor is available at http://www.nature.com/sdata/ and is released under the CC0 waiver to maximize reuse.