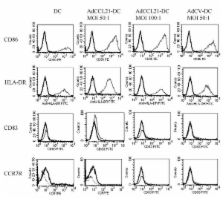 Ex vivo generated dendritic cells (DC) genetically modified to express secondary lymphoid tissue chemokine (CCL-21/SLC) have been shown to stimulate potent antitumor responses in murine models. When injected intratumorally, CCL-21 colocalizes DC and lymphocyte effector cells at the tumor site. This may improve tumor antigen presentation and T cell activation by utilizing the tumor as an in vivo source of antigen for DC. In order to develop DC-based cancer therapies for intratumoral injection that could promote tumor antigen uptake and presentation in situ, we constructed and characterized an adenoviral vector that expresses human CCL-21 (AdCCL-21).

Human monocyte derived DC were cultured in GM-CSF and IL-4 for 6 days. Following AdCCL-21 transduction, CCL-21 protein production was assessed by ELISA on day 8. DC transduced with AdCCL-21 at multiplicities of infection (MOIs) of 50:1 or 100:1 produced up to 210 ± 9 ng/ml and 278 ± 6.5 ng/ml /10 6 cells/48 hours, respectively. Following transduction, an immature DC phenotype was maintained and an upregulation of the costimulatory molecule, CD86 was noted. In addition, supernatant from AdCCL-21-DC caused significant chemotaxis of peripheral blood lymphocytes and mature DC.

These studies demonstrate that AdCCL-21-DC generate functional levels of CCL-21 without adversely altering DC phenotype. These findings strengthen the rationale for further investigation of AdCCL-21-DC as a DC-based therapy in cancer treatment.

F. Nestle, S. Alijagic, M Gilliet … (1998)
Melanoma is the main cause of death in patients with skin cancer. Cytotoxic T lymphocytes (CTLs) attack melanoma cells in an HLA-restricted and tumor antigen-specific manner. Several melanoma-associated tumor antigens have been identified. These antigens are suitable candidates for a vaccination therapy of melanoma. Dendritic cells (DCs) are antigen-presenting cells (APCs) specialized for the induction of a primary T-cell response. Mouse studies have demonstrated the potent capacity of DCs to induce antitumor immunity. In the present clinical pilot study, DCs were generated in the presence of granulocyte/macrophage-colony stimulating factor (GM-CSF) and interleukin 4 (IL-4) and were pulsed with tumor lysate or a cocktail of peptides known to be recognized by CTLs, depending on the patient's HLA haplotype. Keyhole limpet hemocyanin (KLH) was added as a CD4 helper antigen and immunological tracer molecule. Sixteen patients with advanced melanoma were immunized on an outpatient basis. Vaccination was well tolerated. No physical sign of autoimmunity was detected in any of the patients. DC vaccination induced delayed-type hypersensitivity (DTH) reactivity toward KLH in all patients, as well as a positive DTH reaction to peptide-pulsed DCs in 11 patients. Recruitment of peptide-specific CTLs to the DTH challenge site was also demonstrated. Therefore, antigen-specific immunity was induced during DC vaccination. Objective responses were evident in 5 out of 16 evaluated patients (two complete responses, three partial responses) with regression of metastases in various organs (skin, soft tissue, lung, pancreas) and one additional minor response. These data indicate that vaccination with autologous DCs generated from peripheral blood is a safe and promising approach in the treatment of metastatic melanoma. Further studies are necessary to demonstrate clinical effectiveness and impact on the survival of melanoma patients.

Michael Gunn, Shigeru Kyuwa, Carmen Tam … (1999)
Secondary lymphoid organ chemokine (SLC) is expressed in high endothelial venules and in T cell zones of spleen and lymph nodes (LNs) and strongly attracts naive T cells. In mice homozygous for the paucity of lymph node T cell (plt) mutation, naive T cells fail to home to LNs or the lymphoid regions of spleen. Here we demonstrate that expression of SLC is undetectable in plt mice. In addition to the defect in T cell homing, we demonstrate that dendritic cells (DCs) fail to accumulate in spleen and LN T cell zones of plt mice. DC migration to LNs after contact sensitization is also substantially reduced. The physiologic significance of these abnormalities in plt mice is indicated by a markedly increased sensitivity to infection with murine hepatitis virus. The plt mutation maps to the SLC locus; however, the sequence of SLC introns and exons in plt mice is normal. These findings suggest that the abnormalities in plt mice are due to a genetic defect in the expression of SLC and that SLC mediates the entry of naive T cells and antigen-stimulated DCs into the T cell zones of secondary lymphoid organs.

Federica Sallusto, Patrick Schaerli, Pius Loetscher … (1998)
Dendritic cells (DC) migrate into inflamed peripheral tissues where they capture antigens and, following maturation, to lymph nodes where they stimulate T cells. To gain insight into this process we compared chemokine receptor expression in immature and mature DC. Immature DC expressed CCR1, CCR2, CCR5 and CXCR1 and responded to their respective ligands, which are chemokines produced at inflammatory sites. Following stimulation with LPS or TNF-alpha maturing DC expressed high levels of CCR7 mRNA and acquired responsiveness to the CCR7 ligand EBI1 ligand chemokine (ELC), a chemokine produced in lymphoid organs. Maturation also resulted in up-regulation of CXCR4 and down-regulation of CXCR1 mRNA, while CCR1 and CCR5 mRNA were only marginally affected for up to 40 h. However, CCR1 and CCR5 were lost from the cell surface within 3 h, due to receptor down-regulation mediated by chemokines produced by maturing DC. A complete down-regulation of CCR1 and CCR5 mRNA was observed only after stimulation with CD40 ligand of DC induced to mature by LPS treatment. These different patterns of chemokine receptors are consistent with "inflammatory" and "primary response" phases of DC function.