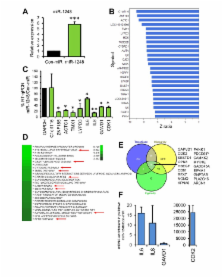 microRNAs (miRNAs) are small noncoding RNAs that post-transcriptionally regulate gene expression by targeting specific mRNAs. Altered expression of circulating miRNAs have been associated with age-related diseases including cancer and cardiovascular disease. Although we and others have found an age-dependent decrease in miRNA expression in peripheral blood mononuclear cells (PBMCs), little is known about the role of circulating miRNAs in human aging. Here, we examined miRNA expression in human serum from young (mean age 30 years) and old (mean age 64 years) individuals using next generation sequencing technology and real-time quantitative PCR. Of the miRNAs that we found to be present in serum, three were significantly decreased in 20 older individuals compared to 20 younger individuals: miR-151a-5p, miR-181a-5p and miR-1248. Consistent with our data in humans, these miRNAs are also present at lower levels in the serum of elderly rhesus monkeys. In humans, miR-1248 was found to regulate the expression of mRNAs involved in inflammatory pathways and miR-181a was found to correlate negatively with the pro-inflammatory cytokines IL-6 and TNFα and to correlate positively with the anti-inflammatory cytokines TGFβ and IL-10. These results suggest that circulating miRNAs may be a biological marker of aging and could also be important for regulating longevity. Identification of stable miRNA biomarkers in serum could have great potential as a noninvasive diagnostic tool as well as enhance our understanding of physiological changes that occur with age.

Evidence that microRNA precursors, unlike other non-coding RNAs, have lower folding free energies than random sequences.

Yves De Koninck,  Pierre Rouzé,  Eric Bonnet … (2004)
Most non-coding RNAs are characterized by a specific secondary and tertiary structure that determines their function. Here, we investigate the folding energy of the secondary structure of non-coding RNA sequences, such as microRNA precursors, transfer RNAs and ribosomal RNAs in several eukaryotic taxa. Statistical biases are assessed by a randomization test, in which the predicted minimum free energy of folding is compared with values obtained for structures inferred from randomly shuffling the original sequences. In contrast with transfer RNAs and ribosomal RNAs, the majority of the microRNA sequences clearly exhibit a folding free energy that is considerably lower than that for shuffled sequences, indicating a high tendency in the sequence towards a stable secondary structure. A possible usage of this statistical test in the framework of the detection of genuine miRNA sequences is discussed.

Circulating microRNAs: Association with disease and potential use as biomarkers.

Glen Reid,  N Zandwijk,  Michaela Kirschner (2011)
The control of gene expression by microRNAs influences many cellular processes and has been implicated in the control of many (patho)physiological states. Recently, microRNAs have been detected in serum and plasma, and circulating microRNA profiles have now been associated with a range of different tumour types, diseases such as stroke and heart disease, as well as altered physiological states such as pregnancy. Here we review the disease-specific profiles of circulating microRNAs, and the methodologies used for their detection and quantification. We also discuss possible functions of circulating microRNAs and their potential as non-invasive biomarkers. Copyright © 2010 Elsevier Ireland Ltd. All rights reserved.

This is an open-access article distributed under the terms of the Creative Commons Attribution License, which permits unrestricted use, distribution, and reproduction in any medium, provided the original author and source are credited