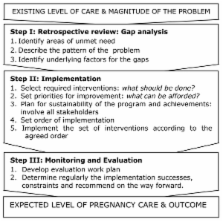 The burden of maternal mortality in resource limited countries is still huge despite being at the top of the global public health agenda for over the last 20 years. We systematically reviewed the impacts of interventions on maternal health and factors for change in these countries.

A systematic review was carried out using the guidelines for Preferred Reporting Items for Systematic Reviews and Meta-Analyses (PRISMA). Articles published in the English language reporting on implementation of interventions, their impacts and underlying factors for maternal health in resource limited countries in the past 23 years were searched from PubMed, Popline, African Index Medicus, internet sources including reproductive health gateway and Google, hand-searching, reference lists and grey literature.

Out of a total of 5084 articles resulting from the search only 58 qualified for systematic review. Programs integrating multiple interventions were more likely to have significant positive impacts on maternal outcomes. Training in emergency obstetric care (EmOC), placement of care providers, refurbishment of existing health facility infrastructure and improved supply of drugs, consumables and equipment for obstetric care were the most frequent interventions integrated in 52% - 65% of all 54 reviewed programs. Statistically significant reduction of maternal mortality ratio and case fatality rate were reported in 55% and 40% of the programs respectively. Births in EmOC facilities and caesarean section rates increased significantly in 71% - 75% of programs using these indicators. Insufficient implementation of evidence-based interventions in resources limited countries was closely linked to a lack of national resources, leadership skills and end-users factors.

This article presents a list of evidenced-based packages of interventions for maternal health, their impacts and factors for change in resource limited countries. It indicates that no single magic bullet intervention exists for reduction of maternal mortality and that all interventional programs should be integrated in order to bring significant changes. State leaders and key actors in the health sectors in these countries and the international community are proposed to translate the lessons learnt into actions and intensify efforts in order to achieve the goals set for maternal health.

An intervention involving traditional birth attendants and perinatal and maternal mortality in Pakistan.

Abdul Jokhio, Michael Winter, Kar Keung Cheng (2005)
There are approximately 4 million neonatal deaths and half a million maternal deaths worldwide each year. There is limited evidence from clinical trials to guide the development of effective maternity services in developing countries. We performed a cluster-randomized, controlled trial involving seven subdistricts (talukas) of a rural district in Pakistan. In three talukas randomly assigned to the intervention group, traditional birth attendants were trained and issued disposable delivery kits; Lady Health Workers linked traditional birth attendants with established services and documented processes and outcomes; and obstetrical teams provided outreach clinics for antenatal care. Women in the four control talukas received usual care. The primary outcome measures were perinatal and maternal mortality. Of the estimated number of eligible women in the seven talukas, 10,114 (84.3 percent) were recruited in the three intervention talukas, and 9443 (78.7 percent) in the four control talukas. In the intervention group, 9184 women (90.8 percent) received antenatal care by trained traditional birth attendants, 1634 women (16.2 percent) were seen antenatally at least once by the obstetrical teams, and 8172 safe-delivery kits were used. As compared with the control talukas, the intervention talukas had a cluster-adjusted odds ratio for perinatal death of 0.70 (95 percent confidence interval, 0.59 to 0.82) and for maternal mortality of 0.74 (95 percent confidence interval, 0.45 to 1.23). Training traditional birth attendants and integrating them into an improved health care system were achievable and effective in reducing perinatal mortality. This model could result in large improvements in perinatal and maternal health in developing countries. Copyright 2005 Massachusetts Medical Society.

Effectiveness of community based safe motherhood promoters in improving the utilization of obstetric care. The case of Mtwara Rural District in Tanzania

Declare Mushi, Rose M Mpembeni, Albrecht Jahn (2010)
Background In Tanzania, maternal mortality ratio remains unacceptably high at 578/100,000 live births. Despite a high coverage of antenatal care (96%), only 44% of deliveries take place within the formal health services. Still, "Ensure skilled attendant at birth" is acknowledged as one of the most effective interventions to reduce maternal deaths. Exploring the potential of community-based interventions in increasing the utilization of obstetric care, the study aimed at developing, testing and assessing a community-based safe motherhood intervention in Mtwara rural District of Tanzania. Method This community-based intervention was designed as a pre-post comparison study, covering 4 villages with a total population of 8300. Intervention activities were implemented by 50 trained safe motherhood promoters (SMPs). Their tasks focused on promoting early and complete antenatal care visits and delivery with a skilled attendant. Data on all 512 deliveries taking place from October 2004 to November 2006 were collected by the SMPs and cross-checked with health service records. In addition 242 respondents were interviewed with respect to knowledge on safe motherhood issues and their perception of the SMP's performance. Skilled delivery attendance was our primary outcome; secondary outcomes included antenatal care attendance and knowledge on Safe Motherhood issues. Results Deliveries with skilled attendant significantly increased from 34.1% to 51.4% (ρ < 0.05). Early ANC booking (4 to 16 weeks) rose significantly from 18.7% at baseline to 37.7% in 2005 and 56.9% (ρ < 0.001) at final assessment. After two years 44 (88%) of the SMPs were still active, 79% of pregnant women were visited. Further benefits included the enhancement of male involvement in safe motherhood issues. Conclusion The study has demonstrated the effectiveness of community-based safe motherhood intervention in promoting the utilization of obstetric care and a skilled attendant at delivery. This improvement is attributed to the SMPs' home visits and the close collaboration with existing community structures as well as health services.

A Prual, G. Breart, M-A Colle … (1999)
Data on maternal morbidity make it possible to assess how many women are likely to need essential obstetric care, and permit the organization, monitoring and evaluation of safe motherhood programmes. In the present paper we propose operational definitions of severe maternal morbidity and report the frequency of such morbidity as revealed in a population-based survey of a cohort of 20,326 pregnant women in six West African countries. The methodology and questionnaires were the same in all areas. Each pregnant woman had four contacts with the obstetric survey team: at inclusion, between 32 and 36 weeks of amenorrhoea, during delivery and 60 days postpartum. Direct obstetric causes of severe morbidity were observed in 1215 women (6.17 cases per 100 live births). This ratio varied significantly between areas, from 3.01% in Bamako to 9.05% in Saint-Louis. The main direct causes of severe maternal morbidity were: haemorrhage (3.05 per 100 live births); obstructed labour (2.05 per 100), 23 cases of which involved uterine rupture (0.12 per 100); hypertensive disorders of pregnancy (0.64 per 100), 38 cases of which involved eclampsia (0.19 per 100); and sepsis (0.09 per 100). Other direct obstetric causes accounted for 12.2% of cases. Case fatality rates were very high for sepsis (33.3%), uterine rupture (30.4%) and eclampsia (18.4%); those for haemorrhage varied from 1.9% for antepartum or peripartum haemorrhage to 3.7% for abruptio placentae. Thus at least 3-9% of pregnant women required essential obstetric care. The high case fatality rates of several complications reflected a poor quality of obstetric care.