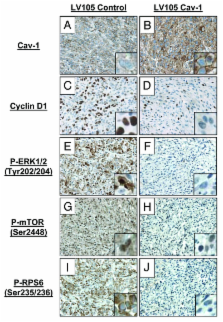 Caveolin-1 (Cav-1) is a critical regulator of tumor progression in a variety of cancers where it has been shown to act as either a tumor suppressor or tumor promoter. In glioblastoma multiforme, it has been previously demonstrated to function as a putative tumor suppressor. Our studies here, using the human glioblastoma-derived cell line U-87MG, further support the role of Cav-1 as a negative regulator of tumor growth. Using a lentiviral transduction approach, we were able to stably overexpress Cav-1 in U-87MG cells. Gene expression microarray analyses demonstrated significant enrichment in gene signatures corresponding to downregulation of MAPK, PI3K/AKT and mTOR signaling, as well as activation of apoptotic pathways in Cav-1-overexpressing U-87MG cells. These same gene signatures were later confirmed at the protein level in vitro. To explore the ability of Cav-1 to regulate tumor growth in vivo, we further show that Cav-1-overexpressing U-87MG cells display reduced tumorigenicity in an ectopic xenograft mouse model, with marked hypoactivation of MAPK and PI3K/mTOR pathways. Finally, we demonstrate that Cav-1 overexpression confers sensitivity to the most commonly used chemotherapy for glioblastoma, temozolomide. In conclusion, Cav-1 negatively regulates key cell growth and survival pathways and may be an effective biomarker for predicting response to chemotherapy in glioblastoma.

The multiple faces of caveolae.

Robert Parton,  Kai Simons (2007)
Caveolae are a highly abundant but enigmatic feature of mammalian cells. They form remarkably stable membrane domains at the plasma membrane but can also function as carriers in the exocytic and endocytic pathways. The apparently diverse functions of caveolae, including mechanosensing and lipid regulation, might be linked to their ability to respond to plasma membrane changes, a property that is dependent on their specialized lipid composition and biophysical properties.

Hiroko Ohgaki,  Paul Kleihues (2007)
Glioblastoma is the most frequent and most malignant human brain tumor. The prognosis remains very poor, with most patients dying within 1 year after diagnosis. Primary and secondary glioblastoma constitute distinct disease subtypes, affecting patients of different age and developing through different genetic pathways. The majority of cases (>90%) are primary glioblastomas that develop rapidly de novo, without clinical or histological evidence of a less malignant precursor lesion. They affect mainly the elderly and are genetically characterized by loss of heterozygosity 10q (70% of cases), EGFR amplification (36%), p16(INK4a) deletion (31%), and PTEN mutations (25%). Secondary glioblastomas develop through progression from low-grade diffuse astrocytoma or anaplastic astrocytoma and manifest in younger patients. In the pathway to secondary glioblastoma, TP53 mutations are the most frequent and earliest detectable genetic alteration, already present in 60% of precursor low-grade astrocytomas. The mutation pattern is characterized by frequent G:C-->A:T mutations at CpG sites. During progression to glioblastoma, additional mutations accumulate, including loss of heterozygosity 10q25-qter ( approximately 70%), which is the most frequent genetic alteration in both primary and secondary glioblastomas. Primary and secondary glioblastomas also differ significantly in their pattern of promoter methylation and in expression profiles at RNA and protein levels. This has significant implications, particularly for the development of novel, targeted therapies, as discussed in this review.