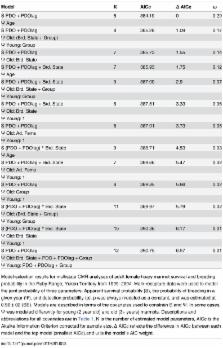 Biennial breeding is a rare life-history trait observed in animal species living in harsh, unproductive environments. This reproductive pattern is thought to occur in 10 of 14 species in the genus Marmota, making marmots useful model organisms for studying its ecological and evolutionary implications. Biennial breeding in marmots has been described as an obligate pattern which evolved as a mechanism to mitigate the energetic costs of reproduction (Evolved Constraint hypothesis). However, recent anecdotal evidence suggests that it is a facultative pattern controlled by annual variation in climate and food availability (Environmental Constraint hypothesis). Finally, in social animals like marmots, biennial breeding could result from reproductive competition between females within social groups (Social Constraint hypothesis). We evaluated these three hypotheses using mark-recapture data from an 8-year study of hoary marmot ( Marmota caligata) population dynamics in the Yukon. Annual variation in breeding probability was modeled using multi-state mark-recapture models, while other reproductive life-history traits were modeled with generalized linear mixed models. Hoary marmots were neither obligate nor facultative biennial breeders, and breeding probability was insensitive to evolved, environmental, or social factors. However, newly mature females were significantly less likely to breed than older individuals. Annual breeding did not result in increased mortality. Female survival and, to a lesser extent, average fecundity were correlated with winter climate, as indexed by the Pacific Decadal Oscillation. Hoary marmots are less conservative breeders than previously believed, and the evidence for biennial breeding throughout Marmota, and in other arctic/alpine/antarctic animals, should be re-examined. Prediction of future population dynamics requires an accurate understanding of life history strategies, and of how life history traits allow animals to cope with changes in weather and other demographic influences.

The sensitive hare: sublethal effects of predator stress on reproduction in snowshoe hares.

Shelly J. Krebs,  Rudy Boonstra,  Michael J. Sheriff (2009)
1. Prey responses to high predation risk can be morphological or behavioural and ultimately come at the cost of survival, growth, body condition, or reproduction. These sub-lethal predator effects have been shown to be mediated by physiological stress. We tested the hypothesis that elevated glucocorticoid concentrations directly cause a decline in reproduction in individual free-ranging female snowshoe hares, Lepus americanus. We measured the cortisol concentration from each dam (using a faecal analysis enzyme immunoassay) and her reproductive output (litter size, offspring birth mass, offspring right hind foot (RHF) length) 30 h after birth. 2. In a natural monitoring study, we monitored hares during the first and second litter from the population peak (2006) to the second year of the decline (2008). We found that faecal cortisol metabolite (FCM) concentration in dams decreased 52% from the first to the second litter. From the first to the second litter, litter size increased 122%, offspring body mass increased 130%, and offspring RHF length increased 112%. Dam FCM concentrations were inversely related to litter size (r(2) = 0.19), to offspring birth mass (r(2) = 0.32), and to offspring RHF length (r(2) = 0.64). 3. In an experimental manipulation, we assigned wild-caught, pregnant hares to a control and a stressed group and held them in pens. Hares in the stressed group were exposed to a dog 1-2 min every other day before parturition to simulate high predation risk. At parturition, unsuccessful-stressed dams (those that failed to give birth to live young) and stressed dams had 837% and 214%, respectively, higher FCM concentrations than control dams. Of those females that gave birth, litter size was similar between control and stressed dams. However, offspring from stressed dams were 37% lighter and 16% smaller than offspring from control dams. Increasing FCM concentration in dams caused the decline of offspring body mass (r(2) = 0.57) and RHF (r(2) = 0.52). 4. This is the first study in a free-ranging population of mammals to show that elevated, predator-induced, glucocorticoid concentrations in individual dams caused a decline in their reproductive output measured both by number and quality of offspring. Thus, we provide evidence that any stressor, not just predation, which increases glucocorticoid concentrations will result in a decrease in reproductive output.

Jeffrey S Wasser,  D P Barash (1983)
Female mammals experience a very high and often unappreciated rate of reproductive failure. Among human pregnancies alone, over 50 per cent fail between conception and parturition, and the majority of these failures are unexplained. These findings present important problems for evolutionary theory as well as for health care practices. This paper addresses these high rates of reproductive failure among mammals, by extending the work of a number of evolutionary biologists regarding the reproductive consequences of environmental adversity. The basic model upon which we elaborate, termed the Reproductive Suppression Model, argues that females can optimize their lifetime reproductive success by suppressing reproduction when future conditions for the survival of offspring are likely to be sufficiently better than present ones as to exceed the costs of the suppression itself. These costs are a function of reproductive time lost and the direct phenotypic effects of the suppression itself. To evaluate the benefits and costs of suppression, the following types of cues should be assessed: the female's physical and mental health, her stage of reproduction, the physical and genetic status of her offspring, and the external conditions at the time of birth. We also examine various issues of social suppression, whereby the conditions for survival of offspring are a function of the reproduction and support of other group members. Under such conditions, some females may be able to improve current conditions for reproduction by suppressing the reproduction of others. Field data from our own work are presented, describing socially mediated reproductive competition among continuously breeding female yellow baboons and among female hoary marmots. Social suppression in other mammals is also evaluated, including that in human beings, and we conclude with some implications of the Reproductive Suppression Model for sexual selection theory regarding female-female reproductive competition, as well as human health care.

Predicting the effects of climate change on avian life-history traits.

Peter Dunn,  D Winkler,  E McCulloch (2002)
Across North America, tree swallows have advanced their mean date of clutch initiation (lay date) by approximately 9 days over the past 30 years, apparently in response to climate change. In a sample of 2,881 nest records collected by the lay public from 1959 to 1991, we examined whether clutch size has also responded to climate change. We found that clutch size is strongly related to lay date, both within and among years, and there has been no significant temporal variation in the slopes or intercepts of the clutch-size/lay-date regressions. As a consequence, we expected increases in clutch size with advancement in lay date; however, we detected no such trend over time. The distributions of egg-laying dates were more constricted in the warmest (and earliest) years, suggesting that changes in mean clutch size might be constrained by changes in the distribution of laying dates. If spring temperatures continue to increase, we predict further reductions of variance in laying dates and relatively small increases in clutch size. Such constraints on life-history variation probably are common and need to be considered when modeling the effects of climate change on reproduction in natural populations. Predicting the long-term effects of constraints and interpreting changes in life-history traits require a better understanding of both adaptive and demographic effects of climate change.

Funding was provided by Environment Canada, the Natural Science and Engineering Research Council of Canada, the Yellowstone to Yukon (Y2Y) Science Grants program, the Canada Foundation for Innovation, the Canada Research Chairs Program, and the Canadian Circumpolar Institute, University of Alberta. The funders had no role in study design, data collection and analysis, decision to publish, or preparation of the manuscript.