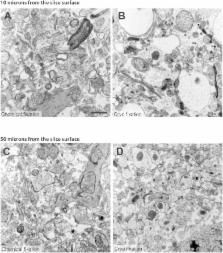 Analysis of brain ultrastructure using electron microscopy typically relies on chemical fixation. However, this is known to cause significant tissue distortion including a reduction in the extracellular space. Cryo fixation is thought to give a truer representation of biological structures, and here we use rapid, high-pressure freezing on adult mouse neocortex to quantify the extent to which these two fixation methods differ in terms of their preservation of the different cellular compartments, and the arrangement of membranes at the synapse and around blood vessels. As well as preserving a physiological extracellular space, cryo fixation reveals larger numbers of docked synaptic vesicles, a smaller glial volume, and a less intimate glial coverage of synapses and blood vessels compared to chemical fixation. The ultrastructure of mouse neocortex therefore differs significantly comparing cryo and chemical fixation conditions.

For many years, scientists have used chemicals to preserve brain tissue to observe its fine structure using high power microscopes. Korogod et al. now show that these chemicals, or fixatives, cause the tissue to shrink, giving the false impression that the cells are tightly packed together. This has led to misinterpretations of how the brain is structured. For example, components such as the synapse, used by neurons to communicate with each other, are bathed in a watery environment, rather than being tightly enclosed by neighbouring cells as previously thought.

Electron microscopy is the only imaging method that is able to see the detailed structure of the nervous system, including synaptic connections. The technique fires a beam of electrons through a sample held in a vacuum and creates images at a higher magnification than light microscopes. However, the electron beam and the vacuum damages live cells and tissues. Therefore, samples must be ‘fixed’ to preserve them before they are imaged with these methods. However, the standard method for fixing brain tissue uses chemical ‘fixatives’, even though these cause shrinkage, and distort the cells.

Korogod et al. used an alternative method of fixation—freezing—to better preserve tiny pieces of mouse brain in their natural state. This was achieved with a technique called ‘high pressure freezing’ that combines jets of liquid nitrogen with very high pressures to instantaneously preserve small samples without causing damage through the formation of ice crystals, or any shrinkage and distortion. Once frozen, the samples of mouse brain are encased in resin, and then imaged with the electron microscope. A comparison between the two preservation techniques showed that chemical fixatives remove the watery environment, or extracellular fluid, that surrounds the cells in the brain, squashing them together.

The synapses were surrounded by large amounts of extracellular fluid, but cryo fixation also revealed that these sites of communication between neurons also contained many more vesicles—the packets containing the chemicals that pass signals across the synapse. Another type of cell, the glial cell, that supports and helps to maintain neurons, was also strongly distorted by the chemical fixation. These were understood to tightly wrap around synapses, as well as blood vessels, but cryo fixation showed this to be less prominent.

Graham Knott,  Linda Wilbrecht,  Anthony Holtmaat … (2006)
Dendritic spines appear and disappear in an experience-dependent manner. Although some new spines have been shown to contain synapses, little is known about the relationship between spine addition and synapse formation, the relative time course of these events, or whether they are coupled to de novo growth of axonal boutons. We imaged dendrites in barrel cortex of adult mice over 1 month, tracking gains and losses of spines. Using serial section electron microscopy, we analyzed the ultrastructure of spines and associated boutons. Spines reconstructed shortly after they appeared often lacked synapses, whereas spines that persisted for 4 d or more always had synapses. New spines had a large surface-to-volume ratio and preferentially contacted boutons with other synapses. In some instances, two new spines contacted the same axon. Our data show that spine growth precedes synapse formation and that new synapses form preferentially onto existing boutons.

Control of glutamate clearance and synaptic efficacy by glial coverage of neurons.

S Oliet,  D Poulain,  R Piet (2001)
Analysis of excitatory synaptic transmission in the rat hypothalamic supraoptic nucleus revealed that glutamate clearance and, as a consequence, glutamate concentration and diffusion in the extracellular space, is associated with the degree of astrocytic coverage of its neurons. Reduction in glutamate clearance, whether induced pharmacologically or associated with a relative decrease of glial coverage in the vicinity of synapses, affected transmitter release through modulation of presynaptic metabotropic glutamate receptors. Astrocytic wrapping of neurons, therefore, contributes to the regulation of synaptic efficacy in the central nervous system.

Axo-somatic and axo-dendritic synapses of the cerebral cortex: an electron microscope study.