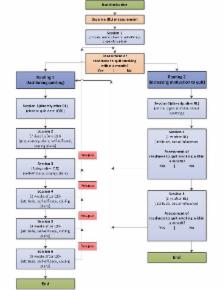 A wide range of effective smoking cessation interventions have been developed to help smokers to quit. Smoking rates remain high, especially among people with a lower level of education. Multiple tailoring adapted to the individual’s readiness to quit and the use of visual messaging may increase smoking cessation.

During a blind randomized controlled trial, smokers willing to quit within 6 months were assigned to a video computer tailoring group with video messages (n=670), a text computer tailoring group with text messages (n=708), or to a control condition with short generic text advice (n=721). After 6 months, effects on 7-day point prevalence abstinence and prolonged abstinence were assessed using logistic regression analyses. Analyses were conducted in 2 samples: (1) respondents (as randomly assigned) who filled in the baseline questionnaire and completed the first session of the program, and (2) a subsample of sample 1, excluding respondents who did not adhere to at least one further intervention session. In primary analyses, we used a negative scenario in which respondents lost to follow-up were classified as smokers. Complete case analysis and multiple imputation analyses were considered as secondary analyses.

Shape of the relapse curve and long-term abstinence among untreated smokers.

Hein de Vries,  Herbert Prins,  Goof Buijs … (2003)
A smoking prevention project in six European countries (European Smoking prevention Framework Approach) was developed, featuring activities for adolescents, schools and parents, including out-of-school activities. Consensus meetings resulted in agreement between the countries on goals, objectives and theoretical methods. Countries' specific objectives were also included. National diversities required country-specific methods to realize the goals and objectives. The community intervention trial was used as the research design. Since interventions took place at the community level, communities or regions were allocated at random to the experimental or control conditions. Complete randomization was achieved in four countries. At baseline, smoking prevalence among 23 125 adolescents at the start of the project was 5.6% for regular smoking and 4.0% for daily smoking. Smoking prevalence rates were higher among girls than boys in all countries as far as weekly smoking was concerned. Process evaluations revealed that the project's ambitions were high, but were limited by various constraints including time and delays in receiving funds. Future smoking prevention projects should aim to identify the effective components within the social influence approach as well as within broader approaches and on reaching sustained effects.

This is an open-access article distributed under the terms of the Creative Commons Attribution License ( http://creativecommons.org/licenses/by/2.0/), which permits unrestricted use, distribution, and reproduction in any medium, provided the original work, first published in the Journal of Medical Internet Research, is properly cited. The complete bibliographic information, a link to the original publication on http://www.jmir.org/, as well as this copyright and license information must be included.