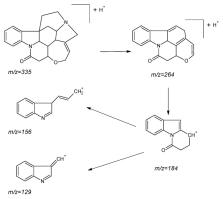 Strychnine is an alkaloid with strong toxic properties. Poisoning results in muscular contractions and death through asphyxiation. Intentional or accidental poisonings with strychnine occur mainly in small animals, especially dogs and occasionally cats. Strychnine can be detected in the liver or stomach contents. Unfortunately, the determination of strychnine in these matrices, especially in postmortem examination, is subject to a significant matrix effect that makes it difficult to confirm the presence of the substance being determined. Therefore, we developed a new liquid chromatography method combined with mass spectrometry. One-gram homogenized samples were extracted and partitioned after adding acetonitrile and 5-mol solution of ammonium acetate. After extraction, the samples were analyzed using high-pressure liquid chromatography-MS/MS/MS. The results of validation fulfil the requirement of the confirmatory criteria according to SANTE/11945/2015 regarding apparent recoveries (98.97% to 104.0%), repeatability (2.9%–4.1%), and within-laboratory reproducibility (3.3%–4.6%). The method can be successfully applied to confirm strychnine poisoning cases.

Philippe Berny,  Francesca Caloni,  Siska Croubels … (2010)
This is the second in a series of three review articles on animal poisoning in Europe and focuses on cases in pet animals and horses in five European countries (Belgium, France, Greece, Italy and Spain) reported over the last decade. In the participating countries, dogs were the most commonly poisoned species, particularly younger animals. The majority of cases in companion animals resulted from exposure to insecticides, although rodenticides (especially anticoagulants and strychnine) posed a significant risk. In all five countries, horses and cats appeared to be more susceptible to plant toxins. Intoxications with herbicides, metals, household products and drugs for veterinary and human use were reported sporadically. The review demonstrates the importance of increased awareness so as to minimise poisoning episodes and emphasises the need to establish a European system for the recording of poisoning data.

Bing-Chung Liau,  Cheng-Chia Lee,  Hui Chen … (2008)
LC/(+)ESI/MS(3) was used to determine aconitine, mesaconitine, and hypaconitine as target markers in crude methanol extracts of (i) the raw lateral roots of Aconitum carmichaeli, (ii) roots treated by three different refining processes, and (iii) eight generally available traditional Chinese medicine (TCM) preparations containing fuzi (treated lateral roots of A. carmichaeli). The optimal ionization behavior resulted when using electrospray ionization (ESI) in positive-ion mode with 0.005% TFA as an additive in the mobile phase. The consecutive reaction monitoring (CRM) mode provided additional improvements in selectivity, which was exploited to minimize the noise and interference problems. Employing this approach, aconitine and mesaconitine were found to decompose readily during the refining processes, but hypaconitine remains present at the same content, presumably because of its characteristic chemical structure. Thus, treated and untreated fuzi samples can be distinguished by monitoring the ratio of aconitine and mesaconitine to hypaconitine. The limits of detection (LODs) for these three markers were 0.05, 0.08, and 0.03 ng/ml. The linearity range for the three marker compounds was 0.1-1,000 ng/ml. The analysis time was 12 min per sample.