Use of lidocaine to prevent postoperative coughing after partial laryngectomy: comparison of three delivery methods 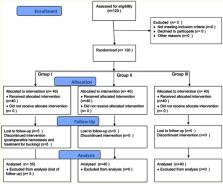 Objective: To compare the effectiveness of lidocaine administration (intravenous injection, dripping via the tracheostomy tube, and spraying into the tracheostomy incision) on postoperative coughing after partial laryngectomy.

Patients and methods: A total of 115 male patients with laryngeal carcinoma scheduled for partial laryngectomy under general anesthesia were randomized into three groups. In group I (n=35), 2% lidocaine hydrochloride (1.5 mg/kg) was slowly infused intravenously. In group II (n=40), 2% lidocaine hydrochloride (1.5 mg/kg) was dripped into the tracheostomy tube upon completion of surgery. In group III (n=40), 7% lidocaine aerosol (5 sprays, 22.5mg) was sprayed into the tracheostomy incision before tracheostomy tube placement. We recorded incidences of coughing, incisional bleeding, and hemodynamic changes when leaving the postanesthesia care unit (T 1), and 6 hrs (T 2) and 24 hrs (T 3) after surgery.

A Boyaci,  A Mizrak,  Z Tosun … (2005)
The alpha agonist dexmedetomidine, a sedative and analgesic, reduces heart rate and blood pressure dose-dependently. We investigated whether it also has the ability to attenuate airway and circulatory reflexes during emergence from anaesthesia. Sixty ASA I-III patients received a standard anaesthetic. Five minutes before the end of surgery, they were randomly allocated to receive either dexmedetomidine 0.5 microg/kg (Group D) (n=30) or saline placebo (Group P) (n=30) intravenously (i.v.) over 60 s in a double-blind design. The blinded anaesthetist awoke all the patients, and the number of coughs per patient was continuously monitored for 15 min after extubation; coughing was evaluated on a 4-point scale. Any laryngospasm, bronchospasm or desaturation was recorded. Heart rate (HR) and systolic and diastolic blood pressure (SAP, DAP) were measured before, during and after tracheal extubation. The time from tracheal extubation and emergence from anaesthesia were recorded. Median coughing scores were 1 (1-3) in Group D and 2 (1-4) in Group P (P<0.05), but there were no differences between the groups in the incidence of breath holding or desaturation. HR, SAP and DAP increased at extubation in both groups (P<0.05), but the increase was less significant with dexmedetomidine. The time from tracheal extubation and emergence from anaesthesia were similar in both groups. These findings suggest that a single-dose bolus injection of dexmedetomidine before tracheal extubation attenuates airway-circulatory reflexes during extubation.

Laryngotracheal topicalization with lidocaine before intubation decreases the incidence of coughing on emergence from general anesthesia.

Peter J. Ralph,  J Lampa,  S Minogue (2004)
Coughing on emergence can result in a number of undesirable side effects, including hypertension, tachycardia, tachyarrhythmias, increased intracranial pressure, and increased intraocular pressure. The efficacy of endotracheal spraying with lidocaine at the time of intubation in preventing coughing on emergence is unknown. In a double-blind placebo-controlled study, we randomized 50 ASA physical status I and II patients presenting for elective gynecological surgery <2 h duration to receive either endotracheal lidocaine 160 mg or placebo before intubation. Both groups were comparable in terms of demographics and intraoperative conditions. The incidence of coughing before tracheal extubation was less frequent in the lidocaine group (26%) than in the placebo group (66%, P < 0.01), as was the incidence after tracheal extubation (4% versus 30%, P = 0.022). This study supports the use of endotracheal lidocaine before intubation in patients undergoing general anesthesia for surgery <2 h duration where coughing on emergence is undesirable.

The effects of intracuff lidocaine on endotracheal-tube-induced emergence phenomena after general anesthesia.

Leeanne M. Carey,  Susan Fagan,  H Frizelle … (2000)
Coughing during emergence from general anesthesia is a common clinical problem. We sought to determine whether inflating the endotracheal tube cuff with lidocaine would create a reservoir of local anesthetic, which might diffuse across the cuff membrane to anesthetize the mucosa, thus attenuating stimulation during extubation of the trachea. A total of 63 patients undergoing elective surgery were enrolled in a prospective, randomized, double-blinded study. After intubation of the trachea with an endotracheal tube, the cuff of the tube was inflated with either lidocaine 4%, saline, or air. After extubation, a blinded observer noted heart rate, blood pressure, oxygen saturation, end-tidal isoflurane concentration, and the incidence of coughing. Data were analyzed by using analysis of variance, Student's t-test, and the chi(2) test for multiple variables. The groups were demographically comparable. There was no difference in hemodynamic or oxygen saturation data between either group. The incidence of coughing was decreased in the lidocaine group for the time period of 4-8 min postextubation (P < 0.05). We conclude that inflation of the cuff of the endotracheal tube can reduce the incidence of coughing in the initial postextubation period, a finding that may benefit certain patient groups in which this is particularly desirable. Tracheal intubation with an endotracheal tube is often necessary during anesthesia. After intubation, inflating a cuff around the endotracheal tube maintains a seal. This can result in coughing during emergence from anesthesia. Our study shows that inflating the cuff of an endotracheal tube with lidocaine rather than air can reduce the incidence of postextubation coughing.