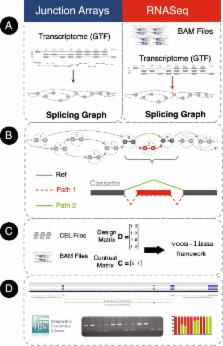 RNA-seq is a reference technology for determining alternative splicing at genome-wide level. Exon arrays remain widely used for the analysis of gene expression, but show poor validation rate with regard to splicing events. Commercial arrays that include probes within exon junctions have been developed in order to overcome this problem.

We compare the performance of RNA-seq (Illumina HiSeq) and junction arrays (Affymetrix Human Transcriptome array) for the analysis of transcript splicing events. Three different breast cancer cell lines were treated with CX-4945, a drug that severely affects splicing. To enable a direct comparison of the two platforms, we adapted EventPointer, an algorithm that detects and labels alternative splicing events using junction arrays, to work also on RNA-seq data. Common results and discrepancies between the technologies were validated and/or resolved by over 200 PCR experiments.

As might be expected, RNA-seq appears superior in cases where the technologies disagree and is able to discover novel splicing events beyond the limitations of physical probe-sets. We observe a high degree of coherence between the two technologies, however, with correlation of EventPointer results over 0.90. Through decimation, the detection power of the junction arrays is equivalent to RNA-seq with up to 60 million reads.

Our results suggest, therefore, that exon-junction arrays are a viable alternative to RNA-seq for detection of alternative splicing events when focusing on well-described transcriptional regions.

Mitchell Guttman,  Manfred Grabherr,  Manuel Garber … (2011)
High-throughput RNA sequencing (RNA-seq) promises a comprehensive picture of the transcriptome, allowing for the complete annotation and quantification of all genes and their isoforms across samples. Realizing this promise requires increasingly complex computational methods. These computational challenges fall into three main categories: (i) read mapping, (ii) transcriptome reconstruction and (iii) expression quantification. Here we explain the major conceptual and practical challenges, and the general classes of solutions for each category. Finally, we highlight the interdependence between these categories and discuss the benefits for different biological applications.

Paul J Gardina,  Tyson Clark,  Brian Shimada … (2006)
Background Alternative splicing is a mechanism for increasing protein diversity by excluding or including exons during post-transcriptional processing. Alternatively spliced proteins are particularly relevant in oncology since they may contribute to the etiology of cancer, provide selective drug targets, or serve as a marker set for cancer diagnosis. While conventional identification of splice variants generally targets individual genes, we present here a new exon-centric array (GeneChip Human Exon 1.0 ST) that allows genome-wide identification of differential splice variation, and concurrently provides a flexible and inclusive analysis of gene expression. Results We analyzed 20 paired tumor-normal colon cancer samples using a microarray designed to detect over one million putative exons that can be virtually assembled into potential gene-level transcripts according to various levels of prior supporting evidence. Analysis of high confidence (empirically supported) transcripts identified 160 differentially expressed genes, with 42 genes occupying a network impacting cell proliferation and another twenty nine genes with unknown functions. A more speculative analysis, including transcripts based solely on computational prediction, produced another 160 differentially expressed genes, three-fourths of which have no previous annotation. We also present a comparison of gene signal estimations from the Exon 1.0 ST and the U133 Plus 2.0 arrays. Novel splicing events were predicted by experimental algorithms that compare the relative contribution of each exon to the cognate transcript intensity in each tissue. The resulting candidate splice variants were validated with RT-PCR. We found nine genes that were differentially spliced between colon tumors and normal colon tissues, several of which have not been previously implicated in cancer. Top scoring candidates from our analysis were also found to substantially overlap with EST-based bioinformatic predictions of alternative splicing in cancer. Conclusion Differential expression of high confidence transcripts correlated extremely well with known cancer genes and pathways, suggesting that the more speculative transcripts, largely based solely on computational prediction and mostly with no previous annotation, might be novel targets in colon cancer. Five of the identified splicing events affect mediators of cytoskeletal organization (ACTN1, VCL, CALD1, CTTN, TPM1), two affect extracellular matrix proteins (FN1, COL6A3) and another participates in integrin signaling (SLC3A2). Altogether they form a pattern of colon-cancer specific alterations that may particularly impact cell motility.