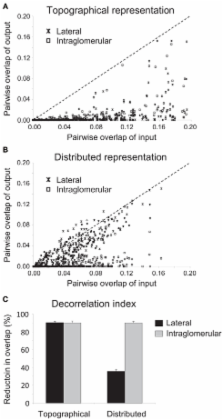 A Grinvald,  T Bonhoeffer (1991)
The mammalian cortex is organized in a columnar fashion: neurons lying below each other from the pia to the white matter usually share many functional properties. Across the cortical surface, cells with similar response properties are also clustered together, forming elongated bands or patches. Some response properties, such as orientation preference in the visual cortex, change gradually across the cortical surface forming 'orientation maps'. To determine the precise layout of iso-orientation domains, knowledge of responses not only to one but to many stimulus orientations is essential. Therefore, the exact depiction of orientation maps has been hampered by technical difficulties and remained controversial for almost thirty years. Here we use in vivo optical imaging based on intrinsic signals to gather information on the responses of a piece of cortex to gratings in many different orientations. This complete set of responses then provides detailed information on the structure of the orientation map in a large patch of cortex from area 18 of the cat. We find that cortical regions that respond best to one orientation form highly ordered patches rather than elongated bands. These iso-orientation patches are organized around 'orientation centres', producing pinwheel-like patterns in which the orientation preference of cells is changing continuously across the cortex. We have also analysed our data for fast changes in orientation preference and find that these 'fractures' are limited to the orientation centres. The pinwheels and orientation centres are such a prominent organizational feature that it should be important to understand their development as well as their function in the processing of visual information.

Refinement of odor molecule tuning by dendrodendritic synaptic inhibition in the olfactory bulb.

K Mori,  M Yokoi,  S Nakanishi (1995)
Mitral/tufted cells (M/T cells) and granule cells form reciprocal dendrodendritic synapses in the main olfactory bulb; the granule cell is excited by glutamate from the M/T cell and in turn inhibits M/T cells by gamma-aminobutyrate. The trans-synaptically excited granule cell is thought to induce lateral inhibition in neighboring M/T cells and to refine olfactory information. It remains, however, elusive how significantly and specifically this synaptic regulation contributes to the discrimination of different olfactory stimuli. This investigation concerns the mechanism of olfactory discrimination by single unit recordings of responses to a series of normal aliphatic aldehydes from individual rabbit M/T cells. This analysis revealed that inhibitory responses are evoked in a M/T cell by a defined subset of odor molecules with structures closely related to the excitatory odor molecules. Furthermore, blockade of the reciprocal synaptic transmission by the glutamate receptor antagonist or the gamma-aminobutyrate receptor antagonist markedly suppressed the odor-evoked inhibition, indicating that the inhibitory responses are evoked by lateral inhibition via the reciprocal synaptic transmission. The synaptic regulation in the olfactory bulb thus greatly enhances the tuning specificity of odor responses and would contribute to discrimination of olfactory information.