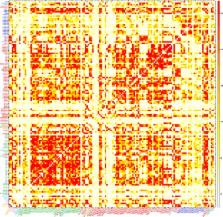 Goat populations that are characterized within the AdaptMap project cover a large part of the worldwide distribution of this species and provide the opportunity to assess their diversity at a global scale. We analysed genome-wide 50 K single nucleotide polymorphism (SNP) data from 144 populations to describe the global patterns of molecular variation, compare them to those observed in other livestock species, and identify the drivers that led to the current distribution of goats.

After domestication in the Fertile Crescent in the early Neolithic era (ca. 12,000 YBP), domestic goats that already carried differentiated gene pools spread to Europe, Africa and Asia. The spread of these populations determined the major genomic background of the continental populations, which currently have a more marked subdivision than that observed in other ruminant livestock species. Subsequently, further diversification occurred at the regional level due to geographical and reproductive isolation, which was accompanied by additional migrations and/or importations, the traces of which are still detectable today. The effects of breed formation were clearly detected, particularly in Central and North Europe. Overall, our results highlight a remarkable diversity that occurs at the global scale and is locally partitioned and often affected by introgression from cosmopolitan breeds. These findings support the importance of long-term preservation of goat diversity, and provide a useful framework for investigating adaptive introgression, directing genetic improvement and choosing breeding targets.

Domestication and early agriculture in the Mediterranean Basin: Origins, diffusion, and impact.

M. A. Zeder (2008)
The past decade has witnessed a quantum leap in our understanding of the origins, diffusion, and impact of early agriculture in the Mediterranean Basin. In large measure these advances are attributable to new methods for documenting domestication in plants and animals. The initial steps toward plant and animal domestication in the Eastern Mediterranean can now be pushed back to the 12th millennium cal B.P. Evidence for herd management and crop cultivation appears at least 1,000 years earlier than the morphological changes traditionally used to document domestication. Different species seem to have been domesticated in different parts of the Fertile Crescent, with genetic analyses detecting multiple domestic lineages for each species. Recent evidence suggests that the expansion of domesticates and agricultural economies across the Mediterranean was accomplished by several waves of seafaring colonists who established coastal farming enclaves around the Mediterranean Basin. This process also involved the adoption of domesticates and domestic technologies by indigenous populations and the local domestication of some endemic species. Human environmental impacts are seen in the complete replacement of endemic island faunas by imported mainland fauna and in today's anthropogenic, but threatened, Mediterranean landscapes where sustainable agricultural practices have helped maintain high biodiversity since the Neolithic.

Worldwide Patterns of Ancestry, Divergence, and Admixture in Domesticated Cattle