Detecting the impact of temperature on transmission of Zika, dengue, and chikungunya using mechanistic models 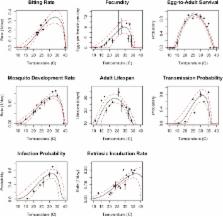 Recent epidemics of Zika, dengue, and chikungunya have heightened the need to understand the seasonal and geographic range of transmission by Aedes aegypti and Ae. albopictus mosquitoes. We use mechanistic transmission models to derive predictions for how the probability and magnitude of transmission for Zika, chikungunya, and dengue change with mean temperature, and we show that these predictions are well matched by human case data. Across all three viruses, models and human case data both show that transmission occurs between 18–34°C with maximal transmission occurring in a range from 26–29°C. Controlling for population size and two socioeconomic factors, temperature-dependent transmission based on our mechanistic model is an important predictor of human transmission occurrence and incidence. Risk maps indicate that tropical and subtropical regions are suitable for extended seasonal or year-round transmission, but transmission in temperate areas is limited to at most three months per year even if vectors are present. Such brief transmission windows limit the likelihood of major epidemics following disease introduction in temperate zones.

Understanding the drivers of recent Zika, dengue, and chikungunya epidemics is a major public health priority. Temperature may play an important role because it affects virus transmission by mosquitoes, through its effects on mosquito development, survival, reproduction, and biting rates as well as the rate at which mosquitoes acquire and transmit viruses. Here, we measure the impact of temperature on transmission by two of the most common mosquito vector species for these viruses, Aedes aegypti and Ae. albopictus. We integrate data from several laboratory experiments into a mathematical model of temperature-dependent transmission, and find that transmission peaks at 26–29°C and can occur between 18–34°C. Statistically comparing model predictions with recent observed human cases of dengue, chikungunya, and Zika across the Americas suggests an important role for temperature, and supports model predictions. Using the model, we predict that most of the tropics and subtropics are suitable for transmission in many or all months of the year, but that temperate areas like most of the United States are only suitable for transmission for a few months during the summer (even if the mosquito vector is present).

Zika Virus and Birth Defects--Reviewing the Evidence for Causality.