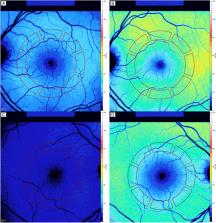 The aim of this study is to investigate the impact of age-related lens opacities and advanced cataract, quantified by LOCS III grading, on quantitative autofluorescence (qAF) measurements in patients before and after cataract surgery. Images from a randomized controlled trial evaluating the impact of femtosecond-laser assisted cataract surgery (FLACS) on retinal thickness were analyzed post-hoc. One-hundred and twenty eyes from 60 consecutive patients with age-related cataract were included and assessed with qAF and optical coherence tomography (OCT) before, 1, 3 and 6 weeks after cataract surgery (randomized 1:1 to FLACS or phacoemulsification). LOCS III grading was performed before surgery. Pre- to post-surgical qAF values, as well as the impact of LOCS III gradings, surgery technique, gender, axial length and age on post-surgery qAF values was investigated using generalized linear mixed models. For this analysis, 106 eyes from 53 patients were usable. No difference in qAF was found between FLACS and phacoemulsification (p > 0.05) and results were pooled for the total cohort. Mean pre-surgical qAF was 89.45 ± 44.9 qAF units, with a significant mean increase of 178.4–191.6% after surgery (p < 0.001). No significant difference was found between the three follow-up visits after surgery (p > 0.05). Higher LOCS III cortical opacity quantifications were associated with a significantly greater increase in qAF after surgery (estimate: 98.56, p = 0.006) and nuclear opacities showed a trend toward an increased change (estimate: 48.8, p = 0.095). Considerable interactions were identified between baseline qAF and cortical opacities, nuclear opacities and posterior subcapsular opacities, as well as nuclear opacities and cortical opacities (p = 0.012, p = 0.064 and p = 0.069, respectively). Quantitative autofluorescence signals are significantly reconstituted after cataract surgery and LOCS III gradings are well associated with post-surgical qAF values. Careful consideration of age-related lens opacities is vital for the correct interpretation of qAF, especially in retinal diseases affecting the elderly.

C. Kathleen Dorey,  John J Weiter,  François C Delori … (1995)
To characterize the intrinsic fluorescence (autofluorescence) of the human ocular fundus with regard to its excitation and emission spectra, age relationship, retinal location, and topography, and to identify the dominant fluorophore among the fundus layers. Using a novel fundus spectrophotometer, fluorescence measurements were made at 7 degrees temporal to the fovea and at the fovea in 30 normal subjects and in 3 selected patients. Topographic measurements were made in 3 subjects. Ex vivo measurements of fluorescence of human retinal pigment epithelium (RPE) were obtained and compared to in vivo data. Fundus fluorescence reveals a broad band of emission between 500 and 750 nm, a maximum of approximately 630 nm, and optimal excitation of approximately 510 nm. Exhibiting a significant increase with age, this fluorescence is highest at 7 degrees to 15 degrees from the fovea, shows a well-defined foveal minimum, and decreases toward the periphery. In vivo fluorescence spectra are consistent with those obtained ex vivo on human RPE. Measurements with short wavelength excitation are strongly influenced by ocular media absorption and reveal an additional minor fluorophore in the fovea. Spectral characteristics, correlation with age, topographic distribution, and retinal location between the choriocapillaris and the photoreceptors suggest that the dominant fundus fluorophore is RPE lipofuscin. The minor fluorophore is probably in the neurosensory retina but has not been identified.