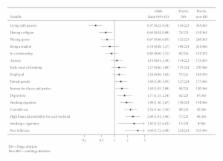 Background. Although binge drinking prevalence and correlates among young people have been extensively studied in the USA and Northern Europe, less is known for Southern Europe countries with relatively healthier drinking cultures. Objective. We aimed at analyzing prevalence and correlates of binge drinking in a representative sample of young adults in Italy. Methods. We conducted a cross-sectional survey among alcohol-consuming young adults. We carried out univariate and multivariate analyses to assess associations between recent binge drinking and candidate variables. Results. We selected 654 subjects, with 590 (mean age: 20.65 ± 1.90) meeting inclusion criteria. Prevalence for recent binge drinking was 38.0%, significantly higher for females than males. Multivariate analysis showed that high alcohol expectancies, large amount of money available during the weekend, interest for parties and discos, female gender, cannabis use, influence by peers, and electronic cigarettes smoking all were significantly associated with recent binge drinking, whereas living with parents appeared a significant protective factor. Conclusions. More than a third of young adults using alcohol are binge drinkers, and, in contrast with findings from Anglo-Saxon countries, females show higher risk as compared with males. These data suggest the increasing importance of primary and secondary prevention programmes for binge drinking.

J Miller, T. Naimi, R D Brewer … (2007)
Underage drinking contributes to the 3 leading causes of death (unintentional injury, homicide, and suicide) among persons aged 12 to 20 years. Most adverse health effects from underage drinking stem from acute intoxication resulting from binge drinking. Although binge drinking, typically defined as consuming > or = 5 drinks on an occasion, is a common pattern of alcohol consumption among youth, few population-based studies have focused specifically on the characteristics of underage binge drinkers and their associated health risk behaviors. We analyzed data on current drinking, binge drinking, and other health risk behaviors from the 2003 National Youth Risk Behavior Survey. Prevalence estimates and 95% confidence intervals were calculated by using SAS and SUDAAN statistical software. Logistic regression was used to examine the associations between different patterns of alcohol consumption and health risk behaviors. Overall, 44.9% of high school students reported drinking alcohol during the past 30 days (28.8% binge drank and 16.1% drank alcohol but did not binge drink). Although girls reported more current drinking with no binge drinking, binge-drinking rates were similar among boys and girls. Binge-drinking rates increased with age and school grade. Students who binge drank were more likely than both nondrinkers and current drinkers who did not binge to report poor school performance and involvement in other health risk behaviors such as riding with a driver who had been drinking, being currently sexually active, smoking cigarettes or cigars, being a victim of dating violence, attempting suicide, and using illicit drugs. A strong dose-response relationship was found between the frequency of binge drinking and the prevalence of other health risk behaviors. Binge drinking is the most common pattern of alcohol consumption among high school youth who drink alcohol and is strongly associated with a wide range of other health risk behaviors. Effective intervention strategies (eg, enforcement of the minimum legal drinking age, screening and brief intervention, and increasing alcohol taxes) should be implemented to prevent underage alcohol consumption and adverse health and social consequences resulting from this behavior.

Characteristics of binge drinkers in Europe.

E Kuntsche, G Gmel, J. Rehm (2004)
Binge drinking has been shown to be associated with considerable social harm and disease burden. This review aims to give an overview from a European perspective of the socio-demographical, individual, and social factors that affect binge drinking and to identify effective interventions to reduce binge drinking. To this end, a computer-assisted search of relevant articles was conducted. Results showed that males tended to binge drinking more frequently than females. Binge drinking was most prevalent among adolescents and young adults, and prevalence levelled off later in life. Socio-economic conditions seemed to have an effect on binge drinking, independent of their effects on the volume of alcohol consumed. The early onset of binge drinking was associated with a history of drinking in the family, but pathways into adulthood are less clear. Binge drinking often co-occurred with other substance use. Motives for binge drinking included both social camaraderie and tension reduction. Which aspect prevails may vary according to the type of binge drinker, but to date has not been satisfactorily explained. Binge drinkers were not likely to know enough about or be aware of the potential risks of bingeing. Pressure from peers was one of the strongest influencing factors for binge drinking and seemed to outweigh parental influences, especially from late adolescence onwards. Binge drinking also varied according to both the predominant adult and adolescent drinking culture with more binge drinking in the northern and middle parts of Europe compared to the southern parts. Thus, a variety of socio-demographical, individual, and social characteristics associated with binge drinking have been identified. However, knowledge in this area is limited, as most research has been conducted among particular groups in specific situations, in particular North American college students. More research in Europe is urgently needed, as results from other cultural backgrounds are difficult to generalize. Copyright 2003 Elsevier Ltd.