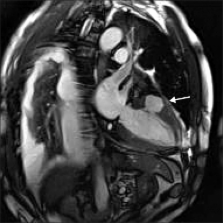 Journal: The Korean Journal of Thoracic and Cardiovascular Surgery

We report a case of pseudo-pseudoaneurysm, which is a very rare complication of myocardial infarction. A 69-year-old man was admitted to our clinic with chest tightness and dyspnea. He had undergone aortic valve replacement with a pericardial bioprosthetic valve, ring mitral annuloplasty, and reconstruction of an aortic annular defect due to infective endocarditis with bovine pericardium 4 years prior. Echocardiography and computed tomography showed pericardial effusion and a 16-mm cavity at the anterolateral wall of the left ventricle. Magnetic resonance imaging suggested either pseudo-pseudoaneurysm or myocardial abscess. We successfully repaired the myocardial defect using a patch made from a vascular graft with pledgeted horizontal mattress sutures under cardiopulmonary bypass.

Tom W. Cherng,  Adriana Hung,  Yun Wang (1998)
A 73 year old man developed a left ventricular pseudoaneurysm following acute myocardial infarction. Coronary angiography showed triple vessel disease with total occlusion of the right coronary artery. On left ventriculography, a serpentine-like pseudoaneurysm was demonstrated that originated from the posterobasal wall of the left ventricle and extended to the right ventricular free wall. He underwent coronary artery bypass surgery with no plication of the pseudoaneurysm. An organised thrombus was also found within the cavity of the pseudoaneurysm. He was doing well approximately eight months after the operation. The prognosis might be determined by the organised thrombus, the serpentine-like structure of pseudoaneurysm, the coronary revascularisation, and the vigorous medical management.

Julio Erdmenger-Orellana,  M Espinosa,  Marco Meraz-Ríos … (2009)
Subepicardial aneurysms (SEA) are an infrequent and serious form of subacute cardiac rupture complicating myocardial infarction. An early diagnosis and surgical repair may be life saving. SEA comprise an abrupt interruption of the myocardium, with a narrow neck and thin wall containing only the epicardium. It may progress to fatal cardiorrhexis. We describe the echocardiographic evolution of this type of cardiac rupture and the contribution of contrast-enhanced echocardiography. A possible pathophysiological mechanism is proposed.

This is an open access article distributed under the terms of the Creative Commons Attribution Non-Commercial License ( http://creativecommons.org/licenses/by-nc/3.0) which permits unrestricted non-commercial use, distribution, and reproduction in any medium, provided the original work is properly cited.