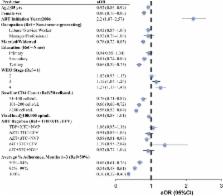 Evaluation of time-dependent predictors of loss to follow-up in a large HIV treatment program revealed that early adherence patterns, in addition to CD4 count and viral load, predicted loss to follow-up and should be used as measures in devising targeted interventions to increase program retention.

Most evaluations of loss to follow-up (LTFU) in human immunodeficiency virus (HIV) treatment programs focus on baseline predictors, prior to antiretroviral therapy (ART) initiation. As risk of LTFU is a continuous issue, the aim of this evaluation was to augment existing information with further examination of time-dependent predictors of loss.

This was a retrospective evaluation of data collected between 2004 and 2012 by the Harvard School of Public Health and the AIDS Prevention Initiative in Nigeria as part of PEPFAR-funded program in Nigeria. We used multivariate modeling methods to examine associations between CD4 + cell counts, viral load, and early adherence patterns with LTFU, defined as no refills collected for at least 2 months since the last scheduled appointment.

Of 51 953 patients initiated on ART between 2004 and 2011, 14 626 (28%) were LTFU by 2012. Factors associated with increased risk for LTFU were young age, having nonincome-generating occupations or no education, being unmarried, World Health Organization (WHO) stage, having a detectable viral load, and lower CD4 + cell counts. In a subset analysis, adherence patterns during the first 3 months of ART were associated with risk of LTFU by month 12.

In settings with limited resources, early adherence patterns, as well as CD4 + cell counts and unsuppressed viral load, at any time point in treatment are predictive of loss and serve as effective markers for developing targeted interventions to reduce rates of attrition.

Understanding reasons for and outcomes of patients lost to follow-up in antiretroviral therapy programs in Africa through a sampling-based approach.

Jeffrey Martin,  H Geng,  S Deeks … (2010)
Losses to follow-up after initiation of antiretroviral therapy (ART) are common in Africa and are a considerable obstacle to understanding the effectiveness of nascent treatment programs. We sought to characterize, through a sampling-based approach, reasons for and outcomes of patients who become lost to follow-up. Cohort study. We searched for and interviewed a representative sample of lost patients or close informants in the community to determine reasons for and outcomes among lost patients. Three thousand six hundred twenty-eight HIV-infected adults initiated ART between January 1, 2004 and September 30, 2007 in Mbarara, Uganda. Eight hundred twenty-nine became lost to follow-up (cumulative incidence at 1, 2, and 3 years of 16%, 30%, and 39%). We sought a representative sample of 128 lost patients in the community and ascertained vital status in 111 (87%). Top reasons for loss included lack of transportation or money and work/child care responsibilities. Among the 111 lost patients who had their vital status ascertained through tracking, 32 deaths occurred (cumulative 1-year incidence 36%); mortality was highest shortly after the last clinic visit. Lower pre-ART CD4 T-cell count, older age, low blood pressure, and a central nervous system syndrome at the last clinic visit predicted deaths. Of patients directly interviewed, 83% were in care at another clinic and 71% were still using ART. Sociostructural factors are the primary reasons for loss to follow-up. Outcomes among the lost are heterogeneous: both deaths and transfers to other clinics were common. Tracking a sample of lost patients is an efficient means for programs to understand site-specific reasons for and outcomes among patients lost to follow-up.

Saad B Omer,  Melanie Lo,  Gary Maartens … (2006)
It is unclear how adherence to highly active antiretroviral therapy (HAART) may best be monitored in large HIV programs in sub-Saharan Africa where it is being scaled up. We aimed to evaluate the association between HAART adherence, as estimated by pharmacy claims, and survival in HIV-1-infected South African adults enrolled in a private-sector AIDS management program. Of the 6288 patients who began HAART between January 1999 and August 2004, 3805 (61%) were female and 6094 (97%) were black African. HAART adherence was >or=80% for 3298 patients (52%) and 100% for 1916 patients (30%). Women were significantly more likely to have adherence>or=80% than men (54% vs 49%, P 200 cells/microL). Pharmacy-based records may be a simple and effective population-level tool for monitoring adherence as HAART programs in Africa are scaled up.

This is an Open Access article distributed under the terms of the Creative Commons Attribution-NonCommercial-NoDerivs licence ( http://creativecommons.org/licenses/by-nc-nd/4.0/), which permits non-commercial reproduction and distribution of the work, in any medium, provided the original work is not altered or transformed in any way, and that the work is properly cited. For commercial re-use, please contact journals.permissions@oup.com.