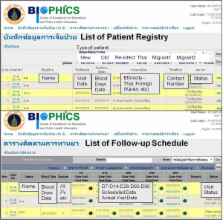 The main objective of this study was to assess the effectiveness of integrating the use of cell-phones into a routine malaria prevention and control programme, to improve the management of malaria cases among an under-served population in a border area. The module for disease and treatment monitoring of malaria (DTMM) consisted of case investigation and case follow-up for treatment compliance and patients' symptoms.

The module combining web-based and mobile technologies was developed as a proof of concept, in an attempt to replace the existing manual, paper-based activities that malaria staff used in treating and caring for malaria patients in the villages for which they were responsible. After a patient was detected and registered onto the system, case-investigation and treatment details were recorded into the malaria database. A follow-up schedule was generated, and the patient's status was updated when the malaria staff conducted their routine home visits, using mobile phones loaded with the follow-up application module. The module also generated text and graph messages for a summary of malaria cases and basic statistics, and automatically fed to predetermined malaria personnel for situation analysis. Following standard public-health practices, access to the patient database was strictly limited to authorized personnel in charge of patient case management.

The DTMM module was developed and implemented at the trial site in late November 2008, and was fully functioning in 2009. The system captured 534 malaria patients in 2009. Compared to paper-based data in 2004-2008, the mobile-phone-based case follow-up rates by malaria staff improved significantly. The follow-up rates for both Thai and migrant patients were about 94-99% on Day 7 (Plasmodium falciparum) and Day 14 (Plasmodium vivax) and maintained at 84-93% on Day 90. Adherence to anti-malarial drug therapy, based on self-reporting, showed high completion rate for P. falciparum-infected cases, but lower rate for P. vivax cases. Patients' symptoms were captured onto the mobile phone during each follow-up visit, either during the home visit or at Malaria Clinic; most patients had headache, muscle pain, and fatigue, and some had fever within the first follow-up day (day7/14) after the first anti-malarial drug dose.

The module was successfully integrated and functioned as part of the malaria prevention and control programme. Despite the bias inherent in sensitizing malaria workers to perform active case follow-up using the mobile device, the study proved for its feasibility and the extent to which community healthcare personnel in the low resource settings could potentially utilize it efficiently to perform routine duties, even in remote areas. The DTMM has been modified and is currently functioning in seven provinces in a project supported by the WHO and the Bill & Melinda Gates Foundation, to contain multi-drug resistant malaria on the Thai-Cambodian border.

The role of anti-malarial drugs in eliminating malaria

Nicholas J. White (2008)
Effective anti-malarial drug treatment reduces malaria transmission. This alone can reduce the incidence and prevalence of malaria, although the effects are greater in areas of low transmission where a greater proportion of the infectious reservoir is symptomatic and receives anti-malarial treatment. Effective treatment has greater effects on the transmission of falciparum malaria, where gametocytogenesis is delayed, compared with the other human malarias in which peak gametocytaemia and transmissibility coincides with peak asexual parasite densities. Mature Plasmodium falciparum gametocytes are more drug resistant and affected only by artemisinins and 8-aminoquinolines. The key operational question now is whether primaquine should be added to artemisinin combination treatments for the treatment of falciparum malaria to reduce further the transmissibility of the treated infection. Radical treatment with primaquine plays a key role in the eradication of vivax and ovale malaria. More evidence is needed on the safety of primaquine when administered without screening for G6PD deficiency to inform individual and mass treatment approaches in the context of malaria elimination programmes.

The epidemiology of malaria in a Karen population on the western border of Thailand.

C Luxemburger,  K Thwai,  Alexander White … (2015)
From November 1991 to November 1992 a prospective, descriptive study of malaria epidemiology was conducted in a Karen population on the western border of Thailand. Two study groups were selected at random and more than 80% of the subjects were followed for one year. In Group 1, comprising 249 schoolchildren (aged 4-15 years), daily surveillance for illness was combined with fortnightly malaria surveys. These children experienced 1.5 parasitaemic infections per child-year (95% confidence interval [CI] 1.3-1.7), of which 68% (193/285) were symptomatic (Plasmodium falciparum 84%, P. vivax 57%). The estimated pyrogenic densities were 1460/microL for P. falciparum and 181/microL for P. vivax. In Group 2, comprising subjects of all age from 428 households, malaria was diagnosed during two-monthly surveys, at weekly home visits, and otherwise by passive case detection. Malaria and splenomegaly prevalence rates were low in all age groups (spleen index 2-9%; P. falciparum prevalence rate 1-4%; P. vivax 1-6%). Group 2 subjects had 1.0 infections per person-year (95% CI 0.9-1.1), most of which were symptomatic (312/357; 87%). Malaria infections clustered in households. Overall, P. vivax caused 53% and P. falciparum 37% of the infections (10% were mixed), but whereas P. vivax was most common in young children, with a decline in incidence with increasing age, P. falciparum incidence rates rose with age to a peak incidence between 20 and 29 years, although the risk of developing a severe malaria decreased with increasing age. There was no death from malaria during the study. P. falciparum infections were more common in males, subjects with a history of malaria before the study, and in those who had travelled outside their village. These findings suggest a higher transmission rate for P. vivax than P. falciparum, although adults still suffered symptomatic malaria due to both species. The 2 malaria parasites found in this area contribute approximately 50% of infections each, but their clinical epidemiology is very different.

Malaria trends and challenges in the Greater Mekong Subregion.

T. Dai,  ShaoHong Lu,  John Patrick Ehrenberg … (2009)
This report provides an overview of the epidemiological patterns of malaria in the Greater Mekong Subregion (GMS) from 1998 to 2007, and highlights critical challenges facing national malaria control programs and partners in effort to build on their successes as they move towards malaria pre-elimination and elimination as a programmatic goal. Epidemiological data provided by malaria programs show a drastic decline in malaria deaths and confirmed malaria positive cases over the last 10 years in the GMS. More than half of confirmed malaria cases and deaths recorded in the GMS occur in Myanmar, however, reporting methods and data management are not comparable between countries despite effort made by WHO to harmonize data collection, analysis and reporting among WHO Member States. Malaria is concentrated in forested/forest-fringe areas of the region mainly along international borders providing strong rationale to develop harmonized cross-border pre-elimination programs in conjunction with national efforts. Across the Mekong Region, the declining efficacy of recommended first-line antimalarials, eg artemisinin-based combination therapies (ACTs) against falciparum malaria on the Cambodia-Thailand border, the prevalence of counterfeit and substandard antimalarial drugs, the lack of health services in general and malaria services in particular in remote settings, and the lack of information and services targeting migrants and mobile population present important barriers to reach or maintain malaria pre-elimination programmatic goals. Strengthening networking between research institutions and non-government organizations will increase knowledge-based decision and action.