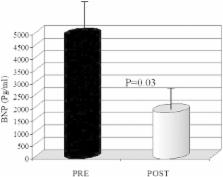 Author(s): Romina Navarri a , 1 , Stefano Lunghetti a , 1 , Matteo Cameli a , Sergio Mondillo a , Roberto Favilli a , Francesca Scarpini b , Luca Puccetti b , *

Levosimendan improves clinical and hemodynamic parameters exerting an anti-inflammatory and antiapoptotic effect in decompensated heart failure. The aim of this study was to evaluate the effects of levosimendan on LV torsion, plasma levels of NT-proBNP and on the balance between pro-inflammatory (TNF-α, IL-6) and anti-inflammatory cytokines (IL-10).

Levosimendan exerts a hemodynamic effect by improving EF and LV torsion in patients with acute HF in association with a positive effect on the balance between pro and anti-inflammatory cytokines.

Protective role of interleukin-10 in atherosclerosis.

F Soubrier,  D Scherman,  B Staels … (1999)
The potential role of anti-inflammatory cytokines in the modulation of the atherosclerotic process remains unknown. Interleukin (IL)-10 has potent deactivating properties in macrophages and T cells and modulates many cellular processes that may interfere with the development and stability of the atherosclerotic plaque. IL-10 is expressed in human atherosclerosis and is associated with decreased signs of inflammation. In the present study, we show that IL-10-deficient C57BL/6J mice fed an atherogenic diet and raised under specific pathogen-free conditions exhibit a significant 3-fold increase in lipid accumulation compared with wild-type mice. Interestingly, the susceptibility of IL-10-deficient mice to atherosclerosis was exceedingly high (30-fold increase) when the mice were housed under conventional conditions. Atherosclerotic lesions of IL-10-deficient mice showed increased T-cell infiltration, abundant interferon-gamma expression, and decreased collagen content. In vivo, transfer of murine IL-10 achieved 60% reduction in lesion size. These results underscore the critical roles of IL-10 in both atherosclerotic lesion formation and stability. Moreover, IL-10 appears to be crucial as a protective factor against the effect of environmental pathogens on atherosclerosis.

Helena C. A. V. Lima,  Erika Crosby,  Hans Torp … (2005)
Left ventricular (LV) torsion is due to oppositely directed apical and basal rotation and has been proposed as a sensitive marker of LV function. In the present study, we introduce and validate speckle tracking echocardiography (STE) as a method for assessment of LV rotation and torsion. Apical and basal rotation by STE was measured from short-axis images by automatic frame-to-frame tracking of gray-scale speckle patterns. Rotation was calculated as the average angular displacement of 9 regions relative to the center of a best-fit circle through the same regions. As reference methods we used sonomicrometry in anesthetized dogs during baseline, dobutamine infusion, and apical ischemia, and magnetic resonance imaging (MRI) tagging in healthy humans. In dogs, the mean peak apical rotation was -3.7+/-1.2 degrees (+/-SD) and -4.1+/-1.2 degrees, and basal rotation was 1.9+/-1.5 degrees and 2.0+/-1.2 degrees by sonomicrometry and STE, respectively. Rotations by both methods increased (P<0.001) during dobutamine infusion. Apical rotation by both methods decreased during left anterior descending coronary artery occlusion (P<0.007), whereas basal rotation was unchanged. In healthy humans, apical rotation was -11.6+/-3.8 degrees and -10.9+/-3.3 degrees, and basal rotation was 4.8+/-1.7 degrees and 4.6+/-1.3 degrees by MRI tagging and STE, respectively. Torsion measurement by STE showed good correlation and agreement with sonomicrometry (r=0.94, P<0.001) and MRI (r=0.85, P<0.001). The present study demonstrates that regional LV rotation and torsion can be measured accurately by STE, suggesting a new echocardiographic approach for quantification of LV systolic function.

Maurizio Galderisi,  Antonello D’Andrea,  M Losi … (2010)
Speckle-tracking echocardiography has recently emerged as a quantitative ultrasound technique for accurately evaluating myocardial function by analyzing the motion of speckles identified on routine 2-dimensional sonograms. It provides non-Doppler, angle-independent, and objective quantification of myocardial deformation and left ventricular systolic and diastolic dynamics. By tracking the displacement of the speckles during the cardiac cycle, strain and the strain rate can be rapidly measured offline after adequate image acquisition. Data regarding the feasibility, accuracy, and clinical applications of speckle-tracking echocardiography are rapidly accumulating. This review describes the fundamental concepts of speckle-tracking echocardiography, illustrates how to obtain strain measurements using this technique, and discusses their recognized and developing clinical applications.

These authors equally contributed to this work.