Modic changes of the cervical spine: T1 slope and its impact on axial neck pain 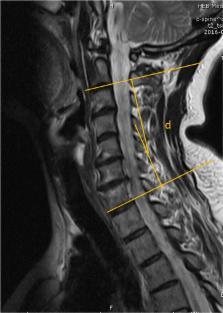 The purpose of the research was to evaluate cervical sagittal parameters on magnetic resonance imaging (MRI) in patients with Modic changes and its impact on axial neck pain.

T1 slope in the Modic changes group was significantly higher compared to that of the control group. The findings suggested that a higher T1 slope with broken compensation of cervical sagittal mechanism may be associated with the development of Modic changes in the cervical spine.

Modic changes and their associations with clinical findings.

Lars Korsholm,  Tom Bendix,  Charlotte Leboeuf-Yde … (2006)
It is believed that disc degeneration (DD) is, in general, only mildly associated with low back pain (LBP). MRI-identified Modic changes (MC), probably a late stage of DD, are relatively strongly associated with LBP but it is not known if people with MC also have a specific clinical profile. The purpose of this study was to investigate if the clinical findings differ in people with Modic changes (MC) as compared to those with only degenerative disc findings or none at all. In a population-based sample of 412 40-year-old Danes, information was collected independently with MRI, questionnaires and clinical examination. Three subgroups of people were created: those with both DD and MC, those with only DD, and those with neither DD nor MC. The clinical pattern was investigated for each subgroup in order to test the assumption that the clinical picture differs in the three groups. It was expected that people with both DD and MC would have a more pronounced clinical profile than those with only DD who, in turn, would differ from those with neither of these two MRI findings. Our findings were generally in concordance with our expectations. MC constitutes the crucial element in the degenerative process around the disc in relation to LBP, history, and clinical findings. People with DD and no MC only vaguely differ from those without. People with LBP and MC may deserve to be diagnosed as having specific LBP.

Modic changes in endplates of lumbar vertebral bodies: prevalence and association with low back and sciatic pain among middle-aged male workers.

Osmo Tervonen,  Markku Heliövaara,  Jaakko Niinimäki … (2007)
Cross-sectional comparison of self-reported low back pain (LBP) symptoms and Modic findings on magnetic resonance imaging (MRI). To investigate associations of frequency and intensity of LBP and sciatic pain with Modic changes in a sample of middle-aged male workers with or without whole-body vibration exposure. Vertebral endplate changes are bone marrow lesions visible on MRI and are assumed to be associated with degenerative intervertebral disc disease. Associations of these so-called Modic changes with clinical symptoms are controversial. Furthermore, most of these studies have been performed in selected series of patients. A total of 228 middle-aged male workers (159 train engineers and 69 sedentary controls) from northern Finland underwent sagittal T1 and T2-weighted MRI. Both endplates of 1140 lumbar interspaces were graded for type and extent of Modic changes. Logistic regression was used to analyze associations of pain variables with Modic changes. Train engineers had on the average higher sciatic pain scores than the sedentary controls, but the prevalence of Modic changes was similar in both occupational groups. Altogether, 178 Modic changes in 128 subjects were recorded: 30% were type I, 66% type II, and 4% both types I and II. Eighty percent of changes occurred at L4-L5 or L5-S1. Modic changes at L5-S1 showed significant association with pain symptoms with increased frequency of LBP (odds ratio [OR] 2.28; 95% confidence interval [CI] 1.44-3.15) and sciatica episodes (OR 1.44; 95% CI 1.01-1.89), and with higher LBP visual analog scores during the past week (OR 1.36; 95% CI 1.06-1.70). Type I lesions and extensive lesions in particular were closely associated with pain. Modic changes at L5-S1 and Modic type I lesions are more likely to be associated with pain symptoms than other types of Modic changes or changes located at other lumbar levels.