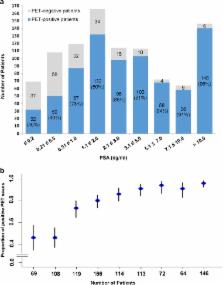 Since the clinical introduction of 68Ga-PSMA-11 PET/CT, this imaging method has rapidly spread and is now regarded as a significant step forward in the diagnosis of recurrent prostate cancer (PCa). The aim of this study was to analyse the influence of several variables with possible influence on PSMA ligand uptake in a large cohort.

We performed a retrospective analysis of 1007 consecutive patients who were scanned with 68Ga-PSMA-11 PET/CT (1 h after injection) from January 2014 to January 2017 to detect recurrent disease. Patients with untreated primary PCa or patients referred for PSMA radioligand therapy were excluded. The possible effects of different variables including PSA level and PSA doubling time (PSA DT), PSA velocity (PSA Vel), Gleason score (GSC, including separate analysis of GSC 7a and 7b), ongoing androgen deprivation therapy (ADT), patient age and amount of injected activity were evaluated.

In 79.5% of patients at least one lesion with characteristics suggestive of recurrent PCa was detected. A pathological (positive) PET/CT scan was associated with PSA level and ADT. GSC, amount of injected activity, patient age, PSA DT and PSA Vel were not associated with a positive PET/CT scan in multivariate analysis.

68Ga-PSMA-11 PET/CT detects tumour lesions in a high percentage of patients with recurrent PCa. Tumour detection is clearly associated with PSA level and ADT. Only a tendency for an association without statistical significance was found between higher GSC and a higher probability of a pathological PET/CT scan. No associations were found between a pathological 68Ga-PSMA-11 PET/CT scan and patient age, amount of injected activity, PSA DT or PSA Vel.

D Bostwick,  A Pacelli,  K. G. Murphy … (1998)
Prostate-specific membrane antigen (PSMA) is an integral membrane protein highly specific for the prostate. PSMA may be clinically useful for predicting outcome in patients with prostate cancer. We compared the expression of PSMA in prostate adenocarcinoma and lymph node metastases in a large series of patients with node-positive cancer. We studied 232 patients with node-positive adenocarcinoma who underwent bilateral pelvic lymphadenectomy and radical retropubic prostatectomy at the Mayo Clinic between 1987 and 1992. Immunohistochemistry was performed using monoclonal antibody 7E11-5.3 directed against PSMA. For each case, the percentage of immunoreactive cells in benign prostate tissue, adenocarcinoma, and lymph node metastases was estimated in 10% increments. Intensity was recorded using a scale of 0 to 3 (0 = no staining, 3 = highest). Cytoplasmic immunoreactivity for PSMA was observed in all cases in benign epithelium and cancer, and most lymph node metastases. The number of cells stained was lowest in benign epithelium; cancer and lymph node metastases were similar (46.2% +/- 27.5% versus 79.3% +/- 18.5% versus 76.4% +/- 26.1%, respectively; all pairs P < 0.05). Intensity of staining was greatest in primary cancer and lowest in lymph node metastases. PSMA is expressed in benign prostatic epithelium and primary cancer in all cases and in 98% of cases with lymph node metastases. Expression of PSMA was greatest in primary cancer for both percentage and intensity of immunoreactive cells. PSMA expression allows the identification of benign and malignant prostatic epithelium and may be a potentially valuable marker in the treatment of patients with prostate cancer.

Novel Preclinical and Radiopharmaceutical Aspects of [68Ga]Ga-PSMA-HBED-CC: A New PET Tracer for Imaging of Prostate Cancer

Matthias Eder,  Oliver Neels,  Miriam Müller … (2014)
The detection of prostate cancer lesions by PET imaging of the prostate-specific membrane antigen (PSMA) has gained highest clinical impact during the last years. 68Ga-labelled Glu-urea-Lys(Ahx)-HBED-CC ([68Ga]Ga-PSMA-HBED-CC) represents a successful novel PSMA inhibitor radiotracer which has recently demonstrated its suitability in individual first-in-man studies. The radiometal chelator HBED-CC used in this molecule represents a rather rarely used acyclic complexing agent with chemical characteristics favourably influencing the biological functionality of the PSMA inhibitor. The simple replacement of HBED-CC by the prominent radiometal chelator DOTA was shown to dramatically reduce the in vivo imaging quality of the respective 68Ga-labelled PSMA-targeted tracer proving that HBED-CC contributes intrinsically to the PSMA binding of the Glu-urea-Lys(Ahx) pharmacophore. Owing to the obvious growing clinical impact, this work aims to reflect the properties of HBED-CC as acyclic radiometal chelator and presents novel preclinical data and relevant aspects of the radiopharmaceutical production process of [68Ga]Ga-PSMA-HBED-CC.