Design and conduct of Caudwell Xtreme Everest: an observational cohort study of variation in human adaptation to progressive environmental hypoxia 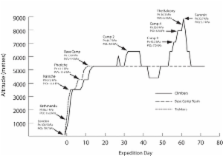 The physiological responses to hypoxaemia and cellular hypoxia are poorly understood, and inter-individual differences in performance at altitude and outcome in critical illness remain unexplained. We propose a model for exploring adaptation to hypoxia in the critically ill: the study of healthy humans, progressively exposed to environmental hypobaric hypoxia (EHH). The aim of this study was to describe the spectrum of adaptive responses in humans exposed to graded EHH and identify factors (physiological and genetic) associated with inter-individual variation in these responses.

198 healthy volunteers and 24 investigators trekking to Everest Base Camp (EBC) (5300 m). A subgroup of 14 investigators studied at altitudes up to 8400 m on Everest.

Of 198 healthy volunteers leaving Kathmandu, 190 reached EBC (5300 m). All 24 investigators reached EBC. The completion rate for planned testing was more than 99% in the investigator group and more than 95% in the trekkers. Unique measurements were safely performed at extreme altitude, including the highest (altitude) field measurements of exercise capacity, cerebral blood flow velocity and microvascular blood flow at 7950 m and arterial blood gas measurement at 8400 m.

This study demonstrates the feasibility and safety of conducting a large healthy volunteer cohort study of human adaptation to hypoxia in this difficult environment. Systematic measurements of a large set of variables were achieved in 222 subjects and at altitudes up to 8400 m. The resulting dataset is a unique resource for the study of genotype:phenotype interactions in relation to hypoxic adaptation.

Experimental models of sepsis and their clinical relevance.

Paulina Sannomiya,  G Garrido,  Philippe F Smet … (2008)
Sepsis remains a major cause of morbidity and mortality mainly because of sepsis-induced multiple organ dysfunction. In contrast to preclinical studies, most clinical trials of promising new treatment strategies for sepsis have failed to demonstrate efficacy. Although many reasons could account for this discrepancy, the misinterpretation of preclinical data obtained from experimental studies and especially the use of animal models that do not adequately mimic human sepsis may have been contributing factors. In this review, the potentials and limitations of various animal models of sepsis are discussed to clarify to which extent these findings are relevant to human sepsis. Such models include intravascular infusion of endotoxin or live bacteria, bacterial peritonitis, cecal ligation and perforation, soft tissue infection, pneumonia or meningitis models using different animal species including rats, mice, rabbits, dogs, pigs, sheep, and nonhuman primates. Despite several limitations, animal models remain essential in the development of all new therapies for sepsis and septic shock because they provide fundamental information about the pharmacokinetics, toxicity, and mechanism of drug action that cannot be replaced by other methods. New therapeutic agents should be studied in infection models, even after the initiation of the septic process. Furthermore, debility conditions need to be reproduced to avoid the exclusive use of healthy animals, which often do not represent the human septic patient.

Animal models of sepsis and shock: a review and lessons learned.

E J Deitch,  Edwin A. Deitch (1997)
Over the past decade, the biotechnology/pharmaceutical industry has been diligently working on the development of immunomodulatory agents for the treatment of shock and sepsis, and the literature is rife with descriptions of novel and innovative molecules that promise to become the panacea for these conditions. Unfortunately, despite promising preclinical evidence, dozens of these new agents have failed to demonstrate clinical efficacy in controlled, randomized clinical trials, abandoning the bedside physician to the traditional armamentarium of drugs and therapeutics for the treatment of patients with these complex, progressive, and life-threatening conditions. The reasons for this quandary are controversial, complex, and multifactorial. This review focuses on the concept that the preclinical trials of many of these agents were conducted using models of sepsis and shock that do not adequately reflect the clinical realities of these conditions. As a result, it is not surprising that clinical trials of agents based on clinically flawed models failed to demonstrate clinical efficacy. The lack of clinical insight during preclinical development of these agents has contributed to the current impasse of the development of safe, efficacious, and potentially lifesaving agents for the treatment of shock and sepsis. Thus, the goal of this review article is to review the advantages and disadvantages of commonly used sepsis and shock models in light of lessons learned from these clinical trials.