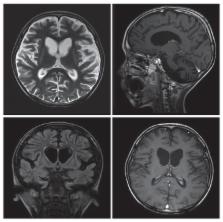 Huntington disease is a neurodegenerative disorder distinguished by the triad of dominant inheritance, choreoathetosis and dementia, usually with onset in the fourth and fifth decades. It is caused by an unstable cytosine-adenine-guanine (CAG) trinucleotide repeat expansion in the gene IT15 in locus 4p16.3. Juvenile HD that constitutes about 3% to 10% of all patients is clinically different from adult-onset form and characterized by a larger number of CAG repeats typically exceeding 60. We report a case of a 6-year-old boy with myoclonic seizure and 140 CAG repeats confirmed by molecular genetic analysis.

A novel gene containing a trinucleotide repeat that is expanded and unstable on Huntington's disease chromosomes. The Huntington's Disease Collaborative Research Group.

M Shah,  N Datson,  L Srinidhi … (1993)
The Huntington's disease (HD) gene has been mapped in 4p16.3 but has eluded identification. We have used haplotype analysis of linkage disequilibrium to spotlight a small segment of 4p16.3 as the likely location of the defect. A new gene, IT15, isolated using cloned trapped exons from the target area contains a polymorphic trinucleotide repeat that is expanded and unstable on HD chromosomes. A (CAG)n repeat longer than the normal range was observed on HD chromosomes from all 75 disease families examined, comprising a variety of ethnic backgrounds and 4p16.3 haplotypes. The (CAG)n repeat appears to be located within the coding sequence of a predicted approximately 348 kd protein that is widely expressed but unrelated to any known gene. Thus, the HD mutation involves an unstable DNA segment, similar to those described in fragile X syndrome, spino-bulbar muscular atrophy, and myotonic dystrophy, acting in the context of a novel 4p16.3 gene to produce a dominant phenotype.

Robin M. Nance,  Jason R. Myers (2000)
Huntington's disease (HD) is an inherited neurodegenerative disorder. The mutation which causes the disease is an expansion in the number of repetitions of three nucleotides, C, A, and G in exon 1 of the huntingtin gene. The gene normally has 15 to 30 repeats and an expansion to 40 or more is associated with HD. HD usually has a mid-life onset, but a juvenile form, defined by onset of symptoms before the age of 21 years, is present in about 7% of HD cases. Juvenile HD is characterized by (1) transmission from an HD affected father, (2) an unusually large repeat size, usually of 60 or more units, and (3) unique clinical features, including rigidity and seizure disorder. Although juvenile onset is associated with a more severe neuropathological involvement, the neuropathological characteristics of juvenile HD are similar to those seen in the adult form in that the striatum bears the brunt of the illness. Clumps of protein, termed inclusion bodies, which stain positive for huntingtin and ubiquitin, are found primarily in the nucleus but also in the cytoplasm and axons in HD neurons. Research suggests that these inclusion bodies sequester a deleterious protein fragment and prolong cell life during the degenerative process of the disease. Copyright 2001 Wiley-Liss, Inc.

Clinical characteristics of childhood-onset (juvenile) Huntington disease: report of 12 patients and review of the literature.