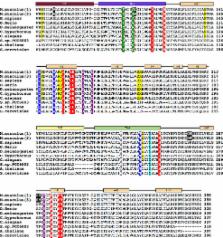 Stearoyl-CoA desaturase (SCD) is conserved in all eukaryotes and introduces the first double bond into saturated fatty acyl-CoAs 1– 4 . Since the monounsaturated products of SCD are key precursors of membrane phospholipids, cholesterol esters, and triglycerides, SCD is pivotal in fatty acid metabolism. Humans have two SCD homologs (SCD1 and SCD5), while mice have four (SCD1–SCD4). SCD1-deficient mice do not become obese or diabetic when fed a high-fat diet because of improved lipid metabolic profiles and insulin sensitivity 5, 6 . Thus, SCD1 is a pharmacological target in the treatment of obesity, diabetes, and other metabolic diseases 7 . SCD1 is an integral membrane protein located in the endoplasmic reticulum, and catalyzes the formation of a cis-double bond between the 9 th and 10 th carbons of stearoyl- or palmitoyl-CoA 8, 9 . The reaction requires molecular oxygen, which is activated by a diiron center, and cytochrome b5, which regenerates the diiron center 10 . To better understand the structural basis of these characteristics of SCD function, we crystallized and solved the structure of mouse SCD1 bound to stearoyl-CoA at 2.6 Å resolution. The structure shows a novel fold comprising four transmembrane helices capped by a cytosolic domain, and a plausible pathway for lateral substrate access and product egress. The acyl chain of the bound stearoyl-CoA is enclosed in a tunnel buried in the cytosolic domain, and the geometry of the tunnel and configuration of the bound acyl chain provide a structural basis for the regioselectivity and stereospecificity of the desaturation reaction. The dimetal center is coordinated by a unique configuration of nine conserved histidine residues that implies a potentially novel metal center and mechanism for oxygen activation. The structure also illustrates a possible route for electron transfer from cytochrome b5 to the diiron center.

Eric F. Pettersen,  Thomas Goddard,  Conrad Huang … (2004)
The design, implementation, and capabilities of an extensible visualization system, UCSF Chimera, are discussed. Chimera is segmented into a core that provides basic services and visualization, and extensions that provide most higher level functionality. This architecture ensures that the extension mechanism satisfies the demands of outside developers who wish to incorporate new features. Two unusual extensions are presented: Multiscale, which adds the ability to visualize large-scale molecular assemblies such as viral coats, and Collaboratory, which allows researchers to share a Chimera session interactively despite being at separate locales. Other extensions include Multalign Viewer, for showing multiple sequence alignments and associated structures; ViewDock, for screening docked ligand orientations; Movie, for replaying molecular dynamics trajectories; and Volume Viewer, for display and analysis of volumetric data. A discussion of the usage of Chimera in real-world situations is given, along with anticipated future directions. Chimera includes full user documentation, is free to academic and nonprofit users, and is available for Microsoft Windows, Linux, Apple Mac OS X, SGI IRIX, and HP Tru64 Unix from http://www.cgl.ucsf.edu/chimera/. Copyright 2004 Wiley Periodicals, Inc.