Prevalence of osteoporosis and related lifestyle and metabolic factors of postmenopausal women and elderly men : A cross-sectional study in Gansu province, Northwestern of China 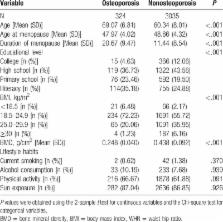 The aim of this study was to investigate the osteoporosis prevalence and the risks of postmenopausal women and elderly men in Gansu province.

The prevalence of osteoporosis in the entire study population was 9.65% for postmenopausal women and 8.08% for elderly males by WHO criteria, while the rate of osteopenia were 27.09% for postmenopausal women and 26.68% for elderly males. Risk of osteoporosis was significantly associated with age, menopause age, duration of menopause, body mass index (BMI), educational level, and alcohol consumption in postmenopausal women. In elderly men, age, BMI, current smoking, alcohol consumption, physical activity, and sun exposure were associated with osteoporosis. The bone turnover markers osteocalcin (OC) and C-terminal cross-linked telopeptides of type I collagen (β-CTX) were inversely correlated with BMD in both genders; serum P and 25(OH)D found no significant correlation with BMD. Serum Ca showed a positive effect on BMD in elderly men only.

An estimate of the worldwide prevalence and disability associated with osteoporotic fractures.

The recent prevalence of osteoporosis and low bone mass in the United States based on bone mineral density at the femoral neck or lumbar spine.

S Wade,  Lucia C Strader,  L Fitzpatrick … (2014)
In nine industrialized countries in North America, Europe, Japan, and Australia, country-specific osteoporosis prevalence (estimated from published data) at the total hip or hip/spine ranged from 9 to 38 % for women and 1 to 8 % for men. In these countries, osteoporosis affects up to 49 million individuals.