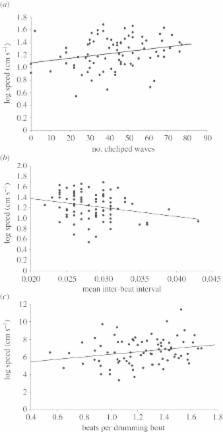 Courting males often perform different behavioural displays that demonstrate aspects of their quality. Male fiddler crabs, Uca sp., are well known for their repetitive claw-waving display during courtship. However, in some species, males produce an additional signal by rapidly stridulating their claw, creating a ‘drumming’ vibrational signal through the substrate as a female approaches, and even continue to drum once inside their burrow. Here, we show that the switch from waving to drumming might provide additional information to the female about the quality of a male, and the properties of his burrow (multiple message hypothesis). Across males there was, however, a strong positive relationship between aspects of their waving and drumming displays, suggesting that drumming adheres to some predictions of the redundant signal hypothesis for multimodal signalling. In field experiments, we show that recent courtship is associated with a significant reduction in male sprint speed, which is commensurate with an oxygen debt. Even so, males that wave and drum more vigorously than their counterparts have a higher sprint speed. Drumming appears to be an energetically costly multimodal display of quality that females should attend to when making their mate choice decisions.

Why do animals repeat displays?

Oliver Pagel,  William Payne (1997)
Both agonistic and sexual animal displays often involve more than one performance of some specific display action. Since repetition is energetically costly there must be good reasons why a signaller should carry out such repetitive actions, rather than simply displaying once. We briefly review three different 'reasons' which arise from three different receiver assessment rules: when assessment is based on the average magnitude of all display actions so far, the reason for the repetition is to improve the accuracy of the estimate (model A); when the assessment is based solely on the action of greatest magnitude so far, the repetition is to replace the signal with one of greater magnitude (model B); when the assessment is based on the cumulative sum of all display actions so far, the repetition is to augment that sum (model C). We discuss how to characterize each case from an understanding of its expected optimal behaviour as predicted by formal models. For model A the mean magnitude of display actions should stay constant and the contest duration should depend on relative qualities. In models B and C the encounter duration depends only on the weaker participant. In model B each display action is greater than the previous, but only a small number of steps are expected. In model C the magnitude of display actions can either escalate, stay constant, or even decrease. The displays of cichlid fish, the roaring contests of red deer, Cervus elaphusthe calling of Blanchard's cricket frogs, Acris crepitans blanchardiand the pheromonal exchanges of yeast gametes are used as illustrative examples.