Pseudomonas aeruginosa Lifestyle: A Paradigm for Adaptation, Survival, and Persistence 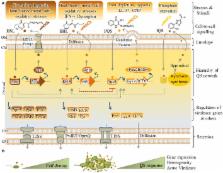 Pseudomonas aeruginosa is an opportunistic pathogen affecting immunocompromised patients. It is known as the leading cause of morbidity and mortality in cystic fibrosis (CF) patients and as one of the leading causes of nosocomial infections. Due to a range of mechanisms for adaptation, survival and resistance to multiple classes of antibiotics, infections by P. aeruginosa strains can be life-threatening and it is emerging worldwide as public health threat. This review highlights the diversity of mechanisms by which P. aeruginosa promotes its survival and persistence in various environments and particularly at different stages of pathogenesis. We will review the importance and complexity of regulatory networks and genotypic-phenotypic variations known as adaptive radiation by which P. aeruginosa adjusts physiological processes for adaptation and survival in response to environmental cues and stresses. Accordingly, we will review the central regulatory role of quorum sensing and signaling systems by nucleotide-based second messengers resulting in different lifestyles of P. aeruginosa. Furthermore, various regulatory proteins will be discussed which form a plethora of controlling systems acting at transcriptional level for timely expression of genes enabling rapid responses to external stimuli and unfavorable conditions. Antibiotic resistance is a natural trait for P. aeruginosa and multiple mechanisms underlying different forms of antibiotic resistance will be discussed here. The importance of each mechanism in conferring resistance to various antipseudomonal antibiotics and their prevalence in clinical strains will be described. The underlying principles for acquiring resistance leading pan-drug resistant strains will be summarized. A future outlook emphasizes the need for collaborative international multidisciplinary efforts to translate current knowledge into strategies to prevent and treat P. aeruginosa infections while reducing the rate of antibiotic resistance and avoiding the spreading of resistant strains.

David L. Paterson,  Robert Bonomo (2005)
Extended-spectrum β-lactamases (ESBLs) are a rapidly evolving group of β-lactamases which share the ability to hydrolyze third-generation cephalosporins and aztreonam yet are inhibited by clavulanic acid. Typically, they derive from genes for TEM-1, TEM-2, or SHV-1 by mutations that alter the amino acid configuration around the active site of these β-lactamases. This extends the spectrum of β-lactam antibiotics susceptible to hydrolysis by these enzymes. An increasing number of ESBLs not of TEM or SHV lineage have recently been described. The presence of ESBLs carries tremendous clinical significance. The ESBLs are frequently plasmid encoded. Plasmids responsible for ESBL production frequently carry genes encoding resistance to other drug classes (for example, aminoglycosides). Therefore, antibiotic options in the treatment of ESBL-producing organisms are extremely limited. Carbapenems are the treatment of choice for serious infections due to ESBL-producing organisms, yet carbapenem-resistant isolates have recently been reported. ESBL-producing organisms may appear susceptible to some extended-spectrum cephalosporins. However, treatment with such antibiotics has been associated with high failure rates. There is substantial debate as to the optimal method to prevent this occurrence. It has been proposed that cephalosporin breakpoints for the Enterobacteriaceae should be altered so that the need for ESBL detection would be obviated. At present, however, organizations such as the Clinical and Laboratory Standards Institute (formerly the National Committee for Clinical Laboratory Standards) provide guidelines for the detection of ESBLs in klebsiellae and Escherichia coli . In common to all ESBL detection methods is the general principle that the activity of extended-spectrum cephalosporins against ESBL-producing organisms will be enhanced by the presence of clavulanic acid. ESBLs represent an impressive example of the ability of gram-negative bacteria to develop new antibiotic resistance mechanisms in the face of the introduction of new antimicrobial agents.

Kim Lewis (2006)
Several well-recognized puzzles in microbiology have remained unsolved for decades. These include latent bacterial infections, unculturable microorganisms, persister cells and biofilm multidrug tolerance. Accumulating evidence suggests that these seemingly disparate phenomena result from the ability of bacteria to enter into a dormant (non-dividing) state. The molecular mechanisms that underlie the formation of dormant persister cells are now being unravelled and are the focus of this Review.

Katarzyna Potrykus,  Michael Cashel (2008)
The fundamental details of how nutritional stress leads to elevating (p)ppGpp are questionable. By common usage, the meaning of the stringent response has evolved from the specific response to (p)ppGpp provoked by amino acid starvation to all responses caused by elevating (p)ppGpp by any means. Different responses have similar as well as dissimilar positive and negative effects on gene expression and metabolism. The different ways that different bacteria seem to exploit their capacities to form and respond to (p)ppGpp are already impressive despite an early stage of discovery. Apparently, (p)ppGpp can contribute to regulation of many aspects of microbial cell biology that are sensitive to changing nutrient availability: growth, adaptation, secondary metabolism, survival, persistence, cell division, motility, biofilms, development, competence, and virulence. Many basic questions still exist. This review tries to focus on some issues that linger even for the most widely characterized bacterial strains.