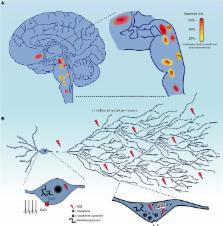 Significant advances have been made uncovering the factors that render neurons vulnerable in Parkinson's disease (PD). However, the critical pathogenic events leading to cell loss remain poorly understood, complicating the development of disease-modifying interventions. Given that the cardinal motor symptoms and pathology of PD involve the loss of dopamine (DA) neurons of the substantia nigra pars compacta (SNc), a majority of the work in the PD field has focused on this specific neuronal population. PD however, is not a disease of DA neurons exclusively: pathology, most notably in the form of Lewy bodies and neurites, has been reported in multiple regions of the central and peripheral nervous system, including for example the locus coeruleus, the dorsal raphe nucleus and the dorsal motor nucleus of the vagus. Cell and/or terminal loss of these additional nuclei is likely to contribute to some of the other symptoms of PD and, most notably to the non-motor features. However, exactly which regions show actual, well-documented, cell loss is presently unclear. In this review we will first examine the strength of the evidence describing the regions of cell loss in idiopathic PD, as well as the order in which this loss occurs. Secondly, we will discuss the neurochemical, morphological and physiological characteristics that render SNc DA neurons vulnerable, and will examine the evidence for these characteristics being shared across PD-affected neuronal populations. The insights raised by focusing on the underpinnings of the selective vulnerability of neurons in PD might be helpful to facilitate the development of new disease-modifying strategies and improve animal models of the disease.

Brain dopamine and the syndromes of Parkinson and Huntington. Clinical, morphological and neurochemical correlations.

The role of protein clearance mechanisms in organismal ageing and age-related diseases.

David Vilchez,  Isabel Saez,  Andrew Dillin (2014)
The ability to maintain a functional proteome, or proteostasis, declines during the ageing process. Damaged and misfolded proteins accumulate with age, impairing cell function and tissue homeostasis. The accumulation of damaged proteins contributes to multiple age-related diseases such as Alzheimer's, Parkinson's or Huntington's disease. Damaged proteins are degraded by the ubiquitin-proteasome system or through autophagy-lysosome, key components of the proteostasis network. Modulation of either proteasome activity or autophagic-lysosomal potential extends lifespan and protects organisms from symptoms associated with proteostasis disorders, suggesting that protein clearance mechanisms are directly linked to ageing and age-associated diseases.

This article was submitted to Movement Disorders, a section of the journal Frontiers in Neurology