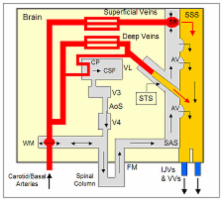 Venous abnormalities contribute to the pathophysiology of several neurological conditions. This paper reviews the literature regarding venous abnormalities in multiple sclerosis (MS), leukoaraiosis, and normal-pressure hydrocephalus (NPH). The review is supplemented with hydrodynamic analysis to assess the effects on cerebrospinal fluid (CSF) dynamics and cerebral blood flow (CBF) of venous hypertension in general, and chronic cerebrospinal venous insufficiency (CCSVI) in particular.

CCSVI-like venous anomalies seem unlikely to account for reduced CBF in patients with MS, thus other mechanisms must be at work, which increase the hydraulic resistance of the cerebral vascular bed in MS. Similarly, hydrodynamic changes appear to be responsible for reduced CBF in leukoaraiosis. The hydrodynamic properties of the periventricular veins make these vessels particularly vulnerable to ischemia and plaque formation.

Venous hypertension in the dural sinuses can alter intracranial compliance. Consequently, venous hypertension may change the CSF dynamics, affecting the intracranial windkessel mechanism. MS and NPH appear to share some similar characteristics, with both conditions exhibiting increased CSF pulsatility in the aqueduct of Sylvius.

CCSVI appears to be a real phenomenon associated with MS, which causes venous hypertension in the dural sinuses. However, the role of CCSVI in the pathophysiology of MS remains unclear.

W. Ian McDonald,  Alistair Compston,  Gilles Edan … (2001)
The International Panel on MS Diagnosis presents revised diagnostic criteria for multiple sclerosis (MS). The focus remains on the objective demonstration of dissemination of lesions in both time and space. Magnetic resonance imaging is integrated with dinical and other paraclinical diagnostic methods. The revised criteria facilitate the diagnosis of MS in patients with a variety of presentations, including "monosymptomatic" disease suggestive of MS, disease with a typical relapsing-remitting course, and disease with insidious progression, without clear attacks and remissions. Previously used terms such as "clinically definite" and "probable MS" are no longer recommended. The outcome of a diagnostic evaluation is either MS, "possible MS" (for those at risk for MS, but for whom diagnostic evaluation is equivocal), or "not MS."

Roland Hanke,  Mireia Sospedra (2004)
Multiple sclerosis (MS) develops in young adults with a complex predisposing genetic trait and probably requires an inciting environmental insult such as a viral infection to trigger the disease. The activation of CD4+ autoreactive T cells and their differentiation into a Th1 phenotype are a crucial events in the initial steps, and these cells are probably also important players in the long-term evolution of the disease. Damage of the target tissue, the central nervous system, is, however, most likely mediated by other components of the immune system, such as antibodies, complement, CD8+ T cells, and factors produced by innate immune cells. Perturbations in immunomodulatory networks that include Th2 cells, regulatory CD4+ T cells, NK cells, and others may in part be responsible for the relapsing-remitting or chronic progressive nature of the disease. However, an important paradigmatic shift in the study of MS has occurred in the past decade. It is now clear that MS is not just a disease of the immune system, but that factors contributed by the central nervous system are equally important and must be considered in the future.

Nancy Chiaravalloti,  John Deluca (2008)
Multiple sclerosis (MS) is a progressive disease of the CNS that is characterised by widespread lesions in the brain and spinal cord. MS results in motor, cognitive, and neuropsychiatric symptoms, all of which can occur independently of one another. The common cognitive symptoms include deficits in complex attention, efficiency of information processing, executive functioning, processing speed, and long-term memory. These deficits detrimentally affect many aspects of daily life, such as the ability to run a household, participate fully in society, and maintain employment--factors that can all affect the overall quality of life of the patient. The increased use of neuroimaging techniques in patients with MS has advanced our understanding of structural and functional changes in the brain that are characteristic of this disease, although much remains to be learned. Moreover, examination of efforts to treat the cognitive deficits in MS is still in the early stages.