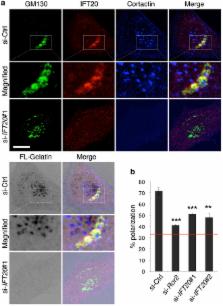 Signaling through the Ror2 receptor tyrosine kinase promotes invadopodia formation for tumor invasion. Here, we identify intraflagellar transport 20 (IFT20) as a new target of this signaling in tumors that lack primary cilia, and find that IFT20 mediates the ability of Ror2 signaling to induce the invasiveness of these tumors. We also find that IFT20 regulates the nucleation of Golgi-derived microtubules by affecting the GM130-AKAP450 complex, which promotes Golgi ribbon formation in achieving polarized secretion for cell migration and invasion. Furthermore, IFT20 promotes the efficiency of transport through the Golgi complex. These findings shed new insights into how Ror2 signaling promotes tumor invasiveness, and also advance the understanding of how Golgi structure and transport can be regulated.

The 'ins' and 'outs' of podosomes and invadopodia: characteristics, formation and function.

Danielle Murphy, Sara A. Courtneidge (2011)
Podosomes and invadopodia are actin-based dynamic protrusions of the plasma membrane of metazoan cells that represent sites of attachment to - and degradation of - the extracellular matrix. The key proteins in these structures include the actin regulators cortactin and neural Wiskott-Aldrich syndrome protein (N-WASP), the adaptor proteins Tyr kinase substrate with four SH3 domains (TKS4) and Tyr kinase substrate with five SH3 domains (TKS5), and the metalloprotease membrane type 1 matrix metalloprotease (MT1MMP; also known as MMP14). Many cell types can produce these structures, including invasive cancer cells, vascular smooth muscle and endothelial cells, and immune cells such as macrophages and dendritic cells. Recently, progress has been made in our understanding of the regulatory and functional aspects of podosome and invadopodium biology and their role in human disease.

Isao Oishi, Hiroaki Suzuki, Nobuyuki Onishi … (2003)
Ror2 is an orphan receptor, belonging to the Ror family of receptor tyrosine kinases. Although Ror2 has been shown to play crucial roles in developmental morphogenesis, the precise signalling events that Ror2 mediates remain elusive. Since Ror2 possesses an extracellular cysteine-rich domain (CRD) that resembles the Wnt-binding sites of the Frizzled (Fz) proteins, it is conceivable that Ror2 interacts with members of the Wnt family. Both Ror2-/- and Wnt5a-/- mice exhibit dwarfism, facial abnormalities, short limbs and tails, dysplasia of lungs and genitals, and ventricular septal defects. In vitro binding assay revealed that Wnt5a binds to the CRD of Ror2. Furthermore, Ror2 associates via its CRD with rFz2, a putative receptor for Wnt5a. Interestingly, Wnt5a and Ror2 activate the non-canonical Wnt pathway, as assessed by activation of JNK in cultured cells and inhibition of convergent extension movements in Xenopus. Our findings indicate that Wnt5a and Ror2 interact physically and functionally. Ror2 may thus act as a receptor for Wnt5a to activate non-canonical Wnt signalling.