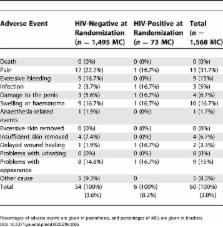 Observational studies suggest that male circumcision may provide protection against HIV-1 infection. A randomized, controlled intervention trial was conducted in a general population of South Africa to test this hypothesis.

A total of 3,274 uncircumcised men, aged 18–24 y, were randomized to a control or an intervention group with follow-up visits at months 3, 12, and 21. Male circumcision was offered to the intervention group immediately after randomization and to the control group at the end of the follow-up. The grouped censored data were analyzed in intention-to-treat, univariate and multivariate, analyses, using piecewise exponential, proportional hazards models. Rate ratios (RR) of HIV incidence were determined with 95% CI. Protection against HIV infection was calculated as 1 − RR. The trial was stopped at the interim analysis, and the mean (interquartile range) follow-up was 18.1 mo (13.0–21.0) when the data were analyzed. There were 20 HIV infections (incidence rate = 0.85 per 100 person-years) in the intervention group and 49 (2.1 per 100 person-years) in the control group, corresponding to an RR of 0.40 (95% CI: 0.24%–0.68%; p < 0.001). This RR corresponds to a protection of 60% (95% CI: 32%–76%). When controlling for behavioural factors, including sexual behaviour that increased slightly in the intervention group, condom use, and health-seeking behaviour, the protection was of 61% (95% CI: 34%–77%).

Male circumcision provides a degree of protection against acquiring HIV infection, equivalent to what a vaccine of high efficacy would have achieved. Male circumcision may provide an important way of reducing the spread of HIV infection in sub-Saharan Africa. (Preliminary and partial results were presented at the International AIDS Society 2005 Conference, on 26 July 2005, in Rio de Janeiro, Brazil.)

The first trial of male circumcision for reducing the risk of HIV finds significantly lower new cases in the treatment group.

Male circumcision and risk of HIV infection in sub-Saharan Africa: a systematic review and meta-analysis.

Kathleen Quigley,  William Weiss,  Keith R. Hayes (2000)
To systematically review studies of male circumcision and the risk of HIV-1 infection in men in sub-Saharan Africa, and to summarize the findings in a meta-analysis. A meta-analysis of observational studies. A systematic literature review was carried out of studies published up to April 1999 that included circumcision as a risk factor for HIV-1 infection among men in sub-Saharan Africa. A random effects meta-analysis was used to calculate a pooled relative risk (RR) and 95% confidence interval (CI) for all studies combined, and stratified by type of study population. Further analyses were conducted among those studies that adjusted for potential confounding factors. Twenty-seven studies were included. Of these, 21 showed a reduced risk of HIV among circumcised men, being approximately half that in uncircumcised men (crude RR = 0.52, CI 0.40-0.68). In 15 studies that adjusted for potential confounding factors, the association was even stronger (adjusted RR = 0.42, CI 0.34-0.54). The association was stronger among men at high risk of HIV (crude RR = 0.27; adjusted RR = 0.29, CI 0.20-0.41) than among men in general populations (crude RR = 0.93; adjusted RR = 0.56, CI 0.44-0.70). Male circumcision is associated with a significantly reduced risk of HIV infection among men in sub-Saharan Africa, particularly those at high risk of HIV. These results suggest that consideration should be given to the acceptability and feasibility of providing safe services for male circumcision as an additional HIV prevention strategy in areas of Africa where men are not traditionally circumcised.

Liam R. Brunham,  John Ronald,  L D'Costa … (1989)
To determine the frequency and risk factors for female to male sexual transmission of human immunodeficiency virus type 1 (HIV-1), a prospective study was carried out in 422 men who had acquired a sexually transmitted disease (STD) from a group of prostitutes with a prevalence of HIV-1 infection of 85%. The initial seroprevalence of HIV among the men was 12%. 24 of 293 (8.2%) initially seronegative men seroconverted to HIV-1. Newly acquired infection was independently associated with frequent prostitute contact (risk ratio 3.2, 95% confidence interval 1.2-8.1), with the acquisition of genital ulcer disease (risk ratio 4.7, 95% confidence interval 1.3-17.0), and with being uncircumcised (risk ratio 8.2, 95% confidence interval 3.0-23.0). 96% of documented seroconversions occurred in men with one or both of the latter two risk factors. In a subgroup of 73 seronegative men who reported a single prostitute sexual contact, the frequency of HIV-1 infection was 8.2% during 12 weeks of observation. No man without a genital ulcer seroconverted. A cumulative 43% of uncircumcised men who acquired an ulcer seroconverted to HIV-1 after a single sexual exposure. These data indicate an extremely high rate of female to male transmission of HIV-1 in the presence of STD and confirm a causal relation between lack of male circumcision, genital ulcer disease, and susceptibility to HIV-1 infection.