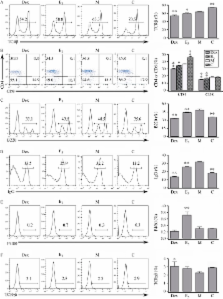 The endogenous estrogens are important modulators of the immune system and its functions. However, their effects are rather complex and many aspects have not been studied. In this study, we used the 1-chloro-2,4-dinitrobenzene (DNCB)-induced contact dermatitis as a disease model and investigated the effect of estriol (E 3), along with two other estrogens, 17β-estradiol and estrone, on the pathogenesis of contact hypersensitivity. A series of parameters, such as ear swelling, skin inflammation, antigen-specific immunoglobulins, and lymphocyte compositions in peripheral lymphoid organs, were evaluated in mice following development of contact dermatitis. We found that administration of all three estrogens elicited strong inhibition of DNCB-induced dermatitis, while E 3 exerted the strongest suppressive effect. Administration of E 3 alleviated dermatitis, and this effect was accompanied by decreases in serum DNCB-specific immunoglobulins, such as IgA, IgG1, IgG2a, and IgG2b. Besides, treatment with E 3 reduced B cell population, especially IgG-producing cells in the peripheral lymphoid organs following the induction of dermatitis. These observations consistently suggest that the antibody (Ab)-mediated humoral immune reactions play a critical role in the pathogenesis of DNCB-induced contact dermatitis. The results from this study demonstrate, for the first time, that estrogen administration has a strong suppressive effect on the pathogenesis of contact dermatitis. These findings offer important insights concerning the pathogenic role of antigen-specific Abs in contact dermatitis and the treatment of chemical-induced, Ab-mediated skin hypersensitivity reactions in humans.

Donald Y M Leung,  Q Hamid,  Mark Boguniewicz … (2004)
Atopic dermatitis is a chronic inflammatory skin disease associated with cutaneous hyperreactivity to environmental triggers and is often the first step in the atopic march that results in asthma and allergic rhinitis. The clinical phenotype that characterizes atopic dermatitis is the product of interactions between susceptibility genes, the environment, defective skin barrier function, and immunologic responses. This review summarizes recent progress in our understanding of the pathophysiology of atopic dermatitis and the implications for new management strategies.

Xue-bin Wang,  Youmin Kang,  Xiaogang Du … (2008)
Naturally occurring CD4+CD25+ regulatory T cells (Treg) exert an important role in mediating maternal tolerance to the fetus during pregnancy, and this effect might be regulated via maternal estrogen secretion. Although estrogen concentration in the pharmaceutical range has been shown to drive expansion of CD4+CD25+ Treg cells, little is known about how and through what mechanisms E2 within the physiological concentration range of pregnancy affects this expansion. Using in vivo and in vitro mouse models in these experiments, we observed that E2 at physiological doses not only expanded Treg cell in different tissues but also increased expression of the Foxp3 gene, a hallmark for CD4+CD25+ Treg cell function, and the IL-10 gene as well. Importantly, our results demonstrate that E2, at physiological doses, stimulated the conversion of CD4+CD25- T cells into CD4+CD25+ T cells which exhibited enhanced Foxp3 and IL-10 expression in vitro. Such converted CD4+CD25+ T cells had similar regulatory function as naturally occurring Treg cells, as demonstrated by their ability to suppress naïve T cell proliferation in a mixed lymphocyte reaction. We also found that the estrogen receptor (ER) exist in the CD4+CD25- T cells and the conversion of CD4+CD25- T cells into CD4+CD25+ T cells stimulated by E2 could be inhibited by ICI182,780, a specific inhibitor of ER(s). This supports that E2 may directly act on CD4+CD25- T cells via ER(s). We conclude that E2 is a potential physiological regulatory factor for the peripheral development of CD4+CD25+ Treg cells during the implantation period in mice. (c) 2007 Wiley-Liss, Inc.