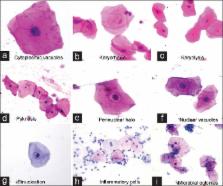 Oral exfoliative cytology is a simple, nonaggressive technique that is well accepted by patients. Therefore, it is an attractive option, which aids in the diagnosis and observation of epithelial atypias associated with oral mucosal diseases.

The aim of this study was to evaluate and compare the quantitative and qualitative alterations in exfoliative smears from type 2 diabetics and healthy individuals.

Collected data was manually entered into the Statistical Package for the Social Sciences version 13.5 for analysis. Student's t-test was used at 95% confidence interval.

Oral cytology from type 2 diabetics is associated with detectable cytomorphological changes with alteration in size of the cell and nucleus, which is site specific, indicating epithelial cell degeneration in cytoplasm and nucleus.

The burden of diabetes and impaired glucose tolerance in India using the WHO 1999 criteria: prevalence of diabetes in India study (PODIS).

S. Jain,  S Bandyopadhay,  R. C. Mishra … (2004)
This random multistage cross-sectional population survey was undertaken to determine the prevalence of diabetes mellitus (DM) and impaired glucose tolerance (IGT) in subjects aged 25 years and above in India. The study was carried out in 77 centers (40 urban and 37 rural). 18363 (9008 males and 9355 females) subjects were studied. 10617 (5379 males and 5238 females) were from urban areas and 7746 (3629 males and 4117 females) from rural areas. Blood samples were taken after a fast of 10-12 h and 2 h after 75 g of oral glucose. Subjects were categorized as having IGT or DM using the World Health Organisation (WHO) (1999) criteria. The standardized prevalence rate for DM in the total Indian, urban and rural populations was 4.3, 5.9 and 2.7%, respectively. The corresponding IGT rates in the three populations was 5.2, 6.3 and 3.7%, respectively. The urban prevalence of DM and IGT was significantly greater than in the rural population (P < 0.001 in both instances). The prevalence of DM was significantly, more than that of IGT (P < 0.001) within both the rural and urban populations. Type 2 diabetes is a major health problem is India.

Diabetes and oral health: an overview.

J Ship (2003)
Diabetes is a common disease with concomitant oral manifestations that impact dental care. The purpose of this review is to summarize the prevalence, signs, symptoms, diagnosis and treatment of diabetes, as well as dental treatment considerations for the patient with diabetes. Safely managing the patient with diabetes requires effective communication among multiple health care providers. Dentists must be familiar with techniques to diagnose, treat and prevent stomatological disorders in patients with diabetes. Dental practitioners will be treating more patients with diabetes in the future, and this article provides an overview of the systemic and oral aspects of the disease that impact dental treatment.