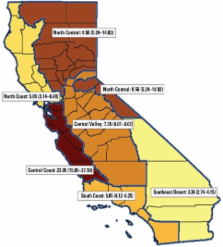 Climate models project that heat waves will increase in frequency and severity. Despite many studies of mortality from heat waves, few studies have examined morbidity.

In this study we investigated whether any age or race/ethnicity groups experienced increased hospitalizations and emergency department (ED) visits overall or for selected illnesses during the 2006 California heat wave.

We aggregated county-level hospitalizations and ED visits for all causes and for 10 cause groups into six geographic regions of California. We calculated excess morbidity and rate ratios (RRs) during the heat wave (15 July to 1 August 2006) and compared these data with those of a reference period (8–14 July and 12–22 August 2006).

The 2006 California heat wave had a substantial effect on morbidity, including regions with relatively modest temperatures. This suggests that population acclimatization and adaptive capacity influenced risk. By better understanding these impacts and population vulnerabilities, local communities can improve heat wave preparedness to cope with a globally warming future.

Claudia Tebaldi,  Pamela Meehl (2004)
A global coupled climate model shows that there is a distinct geographic pattern to future changes in heat waves. Model results for areas of Europe and North America, associated with the severe heat waves in Chicago in 1995 and Paris in 2003, show that future heat waves in these areas will become more intense, more frequent, and longer lasting in the second half of the 21st century. Observations and the model show that present-day heat waves over Europe and North America coincide with a specific atmospheric circulation pattern that is intensified by ongoing increases in greenhouse gases, indicating that it will produce more severe heat waves in those regions in the future.

K.K., M.R.-E., and G.S. are employed by the Natural Resources Defense Council, a nonprofit environmental advocacy organization. The remaining authors declare they have no competing financial interests.

Publisher ID: ehp-117-61
DOI: 10.1289/ehp.11594
PMC ID: 2627866
PubMed ID: 19165388
Copyright statement: This is an Open Access article: verbatim copying and redistribution of this article are permitted in all media for any purpose, provided this notice is preserved along with the article's original DOI.