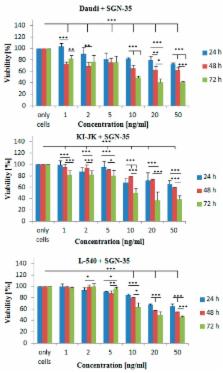 Brentuximab vedotin (SGN-35) is an antibody–drug conjugate with a high selectivity against CD30 + cell lines and more than 300-fold less activity against antigen-negative cells. In the last years, the results of many in vitro and in vivo studies have led to the fast approval of this drug to treat lymphoma patients. Another innovative method to treat tumor cells including lymphoma cells is the use cytokine-induced killer (CIK) cells, which have also been approved and proven to be a safe treatment with only minor adverse events. In this study, a possible additive effect when combining SGN-35 with CIK cells was investigated. The combinational treatment showed that it reduces the viability of CD30 + cell lines significantly in vitro. Additionally, the amount of lymphoma cells was significantly reduced when exposed to CIK cells as well as when exposed to SGN-35. A significant negative effect of SGN-35 on the function of CIK cells could be excluded. These results lead to the assumption that SGN-35 and CIK cells in combination might achieve better results in an in vitro setting compared to the single use of SGN-35 and CIK cells. Further investigations in in vivo models must be conducted to obtain a better understanding of the exact mechanisms of both treatments when applied in combination.

Results of a pivotal phase II study of brentuximab vedotin for patients with relapsed or refractory Hodgkin's lymphoma.

Maurice L. Sievers,  Ajay Gopal,  Sarah Savage … (2012)
Brentuximab vedotin is an antibody-drug conjugate (ADC) that selectively delivers monomethyl auristatin E, an antimicrotubule agent, into CD30-expressing cells. In phase I studies, brentuximab vedotin demonstrated significant activity with a favorable safety profile in patients with relapsed or refractory CD30-positive lymphomas. In this multinational, open-label, phase II study, the efficacy and safety of brentuximab vedotin were evaluated in patients with relapsed or refractory Hodgkin's lymphoma (HL) after autologous stem-cell transplantation (auto-SCT). Patients had histologically documented CD30-positive HL by central pathology review. A total of 102 patients were treated with brentuximab vedotin 1.8 mg/kg by intravenous infusion every 3 weeks. In the absence of disease progression or prohibitive toxicity, patients received a maximum of 16 cycles. The primary end point was the overall objective response rate (ORR) determined by an independent radiology review facility. The ORR was 75% with complete remission (CR) in 34% of patients. The median progression-free survival time for all patients was 5.6 months, and the median duration of response for those in CR was 20.5 months. After a median observation time of more than 1.5 years, 31 patients were alive and free of documented progressive disease. The most common treatment-related adverse events were peripheral sensory neuropathy, nausea, fatigue, neutropenia, and diarrhea. The ADC brentuximab vedotin was associated with manageable toxicity and induced objective responses in 75% of patients with relapsed or refractory HL after auto-SCT. Durable CRs approaching 2 years were observed, supporting study in earlier lines of therapy.

Brian E Toki,  Starr X Rejniak,  Bruce Mixan … (2003)
The chimeric monoclonal antibody cAC10, directed against CD30, induces growth arrest of CD30+ cell lines in vitro and has pronounced antitumor activity in severe combined immunodeficiency (SCID) mouse xenograft models of Hodgkin disease. We have significantly enhanced these activities by conjugating to cAC10 the cytotoxic agent monomethyl auristatin E (MMAE) to create the antibody-drug conjugate cAC10-vcMMAE. MMAE, a derivative of the cytotoxic tubulin modifier auristatin E, was covalently coupled to cAC10 through a valine-citrulline peptide linker. The drug was stably attached to the antibody, showing only a 2% release of MMAE following 10-day incubation in human plasma, but it was readily cleaved by lysosomal proteases after receptor-mediated internalization. Release of MMAE into the cytosol induced G2/M-phase growth arrest and cell death through the induction of apoptosis. In vitro, cAC10-vcMMAE was highly potent and selective against CD30+ tumor lines (IC50 less than 10 ng/mL) but was more than 300-fold less active on antigen-negative cells. In SCID mouse xenograft models of anaplastic large cell lymphoma or Hodgkin disease, cAC10-vcMMAE was efficacious at doses as low as 1 mg/kg. Mice treated at 30 mg/kg cAC10-vcMMAE showed no signs of toxicity. These data indicate that cAC10-vcMMAE may be a highly effective and selective therapy for the treatment of CD30+ neoplasias.

IL Weissman,  IL Weissmen,  HP Kiem … (1991)
C.B-17 severe combined immune deficient (SCID) mice, which lack functional B and T lymphocytes, allow xenografts and, therefore, can be used to study the biology of human malignancies. Two different human B cell lymphoma cell lines, SU-DHL-4 and OCI-Ly8, which both harbor the t(14;18) chromosomal translocation, were injected into C.B-17 SCID mice. Mice injected intravenously or intraperitoneally developed tumors and died in a dose-dependent manner. The presence of tumor cells in various murine tissues could be demonstrated by a clonogenic tumor assay, staining of frozen sections with a monoclonal antibody (mAb) against a human B cell antigen (CD19), and with the polymerase chain reaction technique. A protocol using cytotoxic effector cells was developed and used to selectively deplete the tumor cells from bone marrow. These cells were developed by growing peripheral blood mononuclear cells in the presence of interferon gamma (IFN-gamma), anti- CD3 mAb, and interleukin 2 (IL-2). The timing of IFN-gamma treatment was critical and optimal if IFN-gamma was added before IL-2 treatment. The cells that were stimulated by IFN-gamma, followed by IL-2, could be expanded by treatment with a mAb directed against CD3. These cells could be further activated by IL-1, but not by tumor necrosis factor alpha. With this protocol, a tumor cell kill of 3 logs was obtained as measured by a clonogenic assay. Interestingly, despite their high cytotoxic activity against lymphoma cells, these cells had little toxicity against a subset of normal human hematopoietic precursor cells (granulocyte/macrophage colony-forming units). These cells were further tested by treating murine bone marrow contaminated with the human lymphoma cell line SU-DHL-4, and injecting these cells into SCID mice to assay for tumor growth in vivo. The animals injected with bone marrow contaminated with SU-DHL-4 cells had enhanced survival if the bone marrow was treated with the cytokine-induced killer cells before infusion. The SCID mouse provides a useful in vivo model for evaluation of new therapeutic approaches for lymphoma treatment. The cytokine- induced killer cells generated as described here could have an important impact on bone marrow purging for autologous bone marrow transplantation as well as for adoptive immunotherapy.