A new species of the genus Lycodon (Serpentes, Colubridae) from Guangxi, China 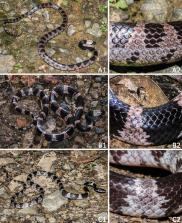 A new species of colubrid snake, Lycodon cathaya sp. nov., is described based on two adult male specimens collected from Huaping Nature Reserve, Guangxi, southern China. In a phylogenetic analyses, the new species is shown to be a sister taxon to the clade composed of L. futsingensis and L. namdongensis with low statistical support, and can be distinguished from all known congeners by the significant genetic divergence in the mitochondrial cytochrome b gene fragment ( p-distance ≥ 7.9%), and morphologically by the following combination of characters: (1) dorsal scales in 17–17–15 rows, smooth throughout; (2) supralabials eight, third to fifth in contact with eye, infralabials nine; (3) ventral scales 199–200 (plus two preventral scales), subcaudals 78; (4) loreal single, elongated, in contact with eye or not, not in contact with internasals; (5) a single preocular not in contact with frontal, supraocular in contact with prefrontal, two postoculars; (6) maxillary teeth 10 (4+2+2+2); (7) two anterior temporals, three posterior temporals; (8) precloacal plate entire; (9) ground color from head to tail brownish black, with 31–35 dusty rose bands on body trunk, 13–16 on tail; (10) bands in 1–2 vertebral scales broad in minimum width; (11) bands separate ground color into brownish black ellipse patches arranged in a row along the top of body and tail; (12) elliptical patches in 3–6 scales of the vertebral row in maximum width; (13) ventral surface of body with wide brownish black strip, margined with a pair of continuous narrow greyish white ventrolateral lines. With the description of the new species, 64 congeners are currently known in the genus Lycodon , with 16 species occurring in China.

H Ota,  Y Kumazawa,  M Nishida … (1998)
The 17,191-bp mitochondrial DNA (mtDNA) of a Japanese colubrid snake, akamata (Dinodon semicarinatus), was cloned and sequenced. The snake mtDNA has some peculiar features that were found in our previous study using polymerase chain reaction: duplicate control regions that have completely identical sequences over 1 kbp, translocation of tRNALeu(UUR) gene, shortened TpsiC arm for most tRNA genes, and a pseudogene for tRNAPro. Phylogenetic analysis of amino acid sequences of protein genes suggested an unusually high rate of molecular evolution in the snake compared to other vertebrates. Southern hybridization experiments using mtDNAs purified from multiple akamata individuals showed that the duplicate state of the control region is not a transient or unstable feature found in a particular individual, but that it stably occurs in mitochondrial genomes of the species. This may, therefore, be regarded as an unprecedented example of stable functional redundancy in animal mtDNA. However, some of the examined individuals contain a rather scanty proportion of heteroplasmic mtDNAs with an organization of genes distinct from that of the major mtDNA. The gene organization of the minor mtDNA is in agreement with one of models that we present to account for the concerted evolution of duplicate control regions.

A Proposed Method of Expressing Scale Reductions in Snakes

Description of six new species of the subgenus Panophrys within the genus Megophrys ( Anura , Megophryidae ) from southeastern China based on molecular and morphological data

Jian Wang,  Zhi-Tong Lyu,  Zu-Yao Liu … (2019)
Abstract The diversity of the subgenus Panophrys within the genus Megophrys has been revealed to be extremely underestimated from southeastern China. Herpetological surveys coupled with extensive sampling in a longitudinal mountain belt located in southeastern China resulted in the discoveries of six new species of the subgenus Panophrys . Furthermore, the new discoveries support the findings of “micro-endemism”, “sympatric phenomenon” and “sympatric but distant phylogenetically” which appear to be common among Panophrys species, and also indicates that the Asian horned toads would be good candidates for studies on speciation and biogeography, and additionally emphasizes the conservation difficulties of these toads.