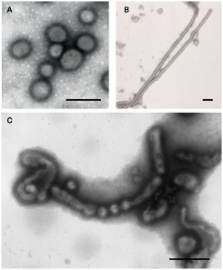 Influenza A virus is an enveloped virus with a segmented, single-strand, negative-sense RNA genome. Its virions show spherical or filamentous shapes of about 100 nm in diameter and occasionally irregular morphology, which exemplifies the pleomorphic nature of these virions. Each viral RNA segment forms a ribonucleoprotein complex (RNP), along with an RNA-dependent RNA polymerase complex and multiple copies of nucleoproteins; the RNPs reside in the enveloped virions. Here, we focus on electron microscopic analyses of influenza virions and RNPs. Based on the morphological and structural observations obtained by using electron microscopic techniques, we present a model of the native morphology of the influenza virion.

Architecture of ribonucleoprotein complexes in influenza A virus particles.

Albert Yen,  Hiroshi Kida,  Yoshihiro Kawaoka … (2006)
In viruses, as in eukaryotes, elaborate mechanisms have evolved to protect the genome and to ensure its timely replication and reliable transmission to progeny. Influenza A viruses are enveloped, spherical or filamentous structures, ranging from 80 to 120 nm in diameter. Inside each envelope is a viral genome consisting of eight single-stranded negative-sense RNA segments of 890 to 2,341 nucleotides each. These segments are associated with nucleoprotein and three polymerase subunits, designated PA, PB1 and PB2; the resultant ribonucleoprotein complexes (RNPs) resemble a twisted rod (10-15 nm in width and 30-120 nm in length) that is folded back and coiled on itself. Late in viral infection, newly synthesized RNPs are transported from the nucleus to the plasma membrane, where they are incorporated into progeny virions capable of infecting other cells. Here we show, by transmission electron microscopy of serially sectioned virions, that the RNPs of influenza A virus are organized in a distinct pattern (seven segments of different lengths surrounding a central segment). The individual RNPs are suspended from the interior of the viral envelope at the distal end of the budding virion and are oriented perpendicular to the budding tip. This finding argues against random incorporation of RNPs into virions, supporting instead a model in which each segment contains specific incorporation signals that enable the RNPs to be recruited and packaged as a complete set. A selective mechanism of RNP incorporation into virions and the unique organization of the eight RNP segments may be crucial to maintaining the integrity of the viral genome during repeated cycles of replication.

Interaction of the influenza virus nucleoprotein with the cellular CRM1-mediated nuclear export pathway.

D Elton,  Sandra Holley,  Robert L. Medcalf … (2000)
Influenza virus transcription occurs in the nuclei of infected cells, where the viral genomic RNAs are complexed with a nucleoprotein (NP) to form ribonucleoprotein (RNP) structures. Prior to assembly into progeny virions, these RNPs exit the nucleus and accumulate in the cytoplasm. The mechanisms responsible for RNP export are only partially understood but have been proposed to involve the viral M1 and NS2 polypeptides. We found that the drug leptomycin B (LMB), which specifically inactivates the cellular CRM1 polypeptide, caused nuclear retention of NP in virus-infected cells, indicating a role for the CRM1 nuclear export pathway in RNP egress. However, no alteration was seen in the cellular distribution of M1 or NS2, even in the case of a mutant virus which synthesizes greatly reduced amounts of NS2. Furthermore, NP was distributed throughout the nuclei of infected cells at early times postinfection but, when retained in the nucleus at late times by LMB treatment, was redistributed to the periphery of the nucleoplasm. No such change was seen in the nuclear distribution of M1 or NS2 after drug treatment. Similar to the behavior of NP, M1 and NS2 in infected cells, LMB treatment of cells expressing each polypeptide in isolation caused nuclear retention of NP but not M1 or NS2. Conversely, overexpression of CRM1 caused increased cytoplasmic accumulation of NP but had little effect on M1 or NS2 distribution. Consistent with this, NP bound CRM1 in vitro. Overall, these data raise the possibility that RNP export is mediated by a direct interaction between NP and the cellular CRM1 export pathway.

Structural organization of a filamentous influenza A virus.

Virginia Calder,  Sebastian Wasilewski,  John A. Berriman … (2010)
Influenza is a lipid-enveloped, pleomorphic virus. We combine electron cryotomography and analysis of images of frozen-hydrated virions to determine the structural organization of filamentous influenza A virus. Influenza A/Udorn/72 virions are capsule-shaped or filamentous particles of highly uniform diameter. We show that the matrix layer adjacent to the membrane is an ordered helix of the M1 protein and its close interaction with the surrounding envelope determines virion morphology. The ribonucleoprotein particles (RNPs) that package the genome segments form a tapered assembly at one end of the virus interior. The neuraminidase, which is present in smaller numbers than the hemagglutinin, clusters in patches and are typically present at the end of the virion opposite to RNP attachment. Incubation of virus at low pH causes a loss of filamentous morphology, during which we observe a structural transition of the matrix layer from its helical, membrane-associated form to a multilayered coil structure inside the virus particle. The polar organization of the virus provides a model for assembly of the virion during budding at the host membrane. Images and tomograms of A/Aichi/68 X-31 virions show the generality of these conclusions to non-filamentous virions.