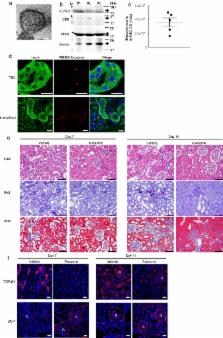 Bone marrow-derived mesenchymal stem cells (MSCs) have contributed to the improvement of diabetic nephropathy (DN); however, the actual mediator of this effect and its role has not been characterized thoroughly. We investigated the effects of MSC therapy on DN, focusing on the paracrine effect of renal trophic factors, including exosomes secreted by MSCs. MSCs and MSC-conditioned medium (MSC-CM) as renal trophic factors were administered in parallel to high-fat diet (HFD)-induced type 2 diabetic mice and streptozotocin (STZ)-induced insulin-deficient diabetic mice. Both therapies showed approximately equivalent curative effects, as each inhibited the exacerbation of albuminuria. They also suppressed the excessive infiltration of BMDCs into the kidney by regulating the expression of the adhesion molecule ICAM-1. Proinflammatory cytokine expression (e.g., TNF-α) and fibrosis in tubular interstitium were inhibited. TGF-β1 expression was down-regulated and tight junction protein expression (e.g., ZO-1) was maintained, which sequentially suppressed the epithelial-to-mesenchymal transition of tubular epithelial cells (TECs). Exosomes purified from MSC-CM exerted an anti-apoptotic effect and protected tight junction structure in TECs. The increase of glomerular mesangium substrate was inhibited in HFD-diabetic mice. MSC therapy is a promising tool to prevent DN via the paracrine effect of renal trophic factors including exosomes due to its multifactorial action.

S Potenta,  H Sugimoto,  Raghu Kalluri … (2008)
Fibroblasts are key mediators of fibrosis in the kidney and other organs, but their origin during fibrosis is still not completely clear. Activated fibroblasts likely arise from resident quiescent fibroblasts via epithelial-to-mesenchymal transition and from the bone marrow. Here, we demonstrate that endothelial cells also contribute to the emergence of fibroblasts during kidney fibrosis via the process of endothelial-to-mesenchymal transition (EndMT). We examined the contribution of EndMT to renal fibrosis in three mouse models of chronic kidney disease: (1) Unilateral ureteral obstructive nephropathy, (2) streptozotocin-induced diabetic nephropathy, and (3) a model of Alport renal disease. Approximately 30 to 50% of fibroblasts coexpressed the endothelial marker CD31 and markers of fibroblasts and myofibroblasts such as fibroblast specific protein-1 and alpha-smooth muscle actin. Endothelial lineage tracing using Tie2-Cre;R26R-stop-EYFP transgenic mice further confirmed the presence of EndMT-derived fibroblasts. Collectively, our results demonstrate that EndMT contributes to the accumulation of activated fibroblasts and myofibroblasts in kidney fibrosis and suggest that targeting EndMT might have therapeutic potential.

Ying Zhou,  Huitao Xu,  Wenrong Xu … (2013)
Introduction Administration of bone marrow mesenchymal stem cells (MSCs) or secreted microvesicles improves recovery from acute kidney injury (AKI). However, the potential roles and mechanisms are not well understood. In the current study, we focused on the protective effect of exosomes derived from human umbilical cord mesenchymal stem cells (hucMSC-ex) on cisplatin-induced nephrotoxicity in vivo and in vitro. Methods We constructed cisplatin-induced AKI rat models. At 24 h after treatment with cisplatin, hucMSC-ex were injected into the kidneys via the renal capsule; human lung fibroblast (HFL-1)-secreted exosomes (HFL-1-ex) were used as controls. All animals were killed at day 5 after administration of cisplatin. Renal function, histological changes, tubular apoptosis and proliferation, and degree of oxidative stress were evaluated. In vitro, rat renal tubular epithelial (NRK-52E) cells were treated with or without cisplatin and after 6 h treated with or without exosomes. Cells continued to be cultured for 24 h, and were then harvested for western blotting, apoptosis and detection of degree of oxidative stress. Results After administration of cisplatin, there was an increase in blood urea nitrogen (BUN) and creatinine (Cr) levels, apoptosis, necrosis of proximal kidney tubules and formation of abundant tubular protein casts and oxidative stress in rats. Cisplatin-induced AKI rats treated with hucMSC-ex, however, showed a significant reduction in all the above indexes. In vitro, treatment with cisplatin alone in NRK-52E cells resulted in an increase in the number of apoptotic cells, oxidative stress and activation of the p38 mitogen-activated protein kinase (p38MAPK) pathway followed by a rise in the expression of caspase 3, and a decrease in cell multiplication, while those results were reversed in the hucMSCs-ex-treated group. Furthermore, it was observed that hucMSC-ex promoted cell proliferation by activation of the extracellular-signal-regulated kinase (ERK)1/2 pathway. Conclusions The results in the present study indicate that hucMSC-ex can repair cisplatin-induced AKI in rats and NRK-52E cell injury by ameliorating oxidative stress and cell apoptosis, promoting cell proliferation in vivo and in vitro. This suggests that hucMSC-ex could be exploited as a potential therapeutic tool in cisplatin-induced nephrotoxicity.

Stromal cells responsible for transferring the microenvironment of the hemopoietic tissues. Cloning in vitro and retransplantation in vivo.