Interleukin-6, a Major Cytokine in the Central Nervous System 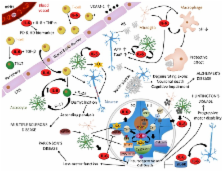 Interleukin-6 (IL-6) is a cytokine originally identified almost 30 years ago as a B-cell differentiation factor, capable of inducing the maturation of B cells into antibody-producing cells. As with many other cytokines, it was soon realized that IL-6 was not a factor only involved in the immune response, but with many critical roles in major physiological systems including the nervous system. IL-6 is now known to participate in neurogenesis (influencing both neurons and glial cells), and in the response of mature neurons and glial cells in normal conditions and following a wide arrange of injury models. In many respects, IL-6 behaves in a neurotrophin-like fashion, and seemingly makes understandable why the cytokine family that it belongs to is known as neuropoietins. Its expression is affected in several of the main brain diseases, and animal models strongly suggest that IL-6 could have a role in the observed neuropathology and that therefore it is a clear target of strategic therapies.

Tony Wyss-Coray (2006)
Alzheimer disease is a progressive dementia with unknown etiology that affects a growing number of the aging population. Increased expression of inflammatory mediators in postmortem brains of people with Alzheimer disease has been reported, and epidemiological studies link the use of anti-inflammatory drugs with reduced risk for the disorder. On the initial basis of this kind of evidence, inflammation has been proposed as a possible cause or driving force of Alzheimer disease. If true, this could have important implications for the development of new treatments. Alternatively, inflammation could simply be a byproduct of the disease process and may not substantially alter its course. Or components of the inflammatory response might even be beneficial and slow the disease. To address these possibilities, we need to determine whether inflammation in Alzheimer disease is an early event, whether it is genetically linked with the disease and whether manipulation of inflammatory pathways changes the course of the pathology. Although there is still little evidence that inflammation triggers or promotes Alzheimer disease, increasing evidence from mouse models suggests that certain inflammatory mediators are potent drivers of the disease. Related factors, on the other hand, elicit beneficial responses and can reduce disease.

Mats Rudling,  Claes Ohlsson,  Kristina Wallenius … (2001)
The immune-modulating cytokine interleukin-6 (IL-6) is expressed both in adipose tissue and centrally in hypothalamic nuclei that regulate body composition. We investigated the impact of loss of IL-6 on body composition in mice lacking the gene encoding IL-6 (Il6-/- mice) and found that they developed mature-onset obesity that was partly reversed by IL-6 replacement. The obese Il6-/- mice had disturbed carbohydrate and lipid metabolism, increased leptin levels and decreased responsiveness to leptin treatment. To investigate the possible mechanism and site of action of the anti-obesity effect of IL-6, we injected rats centrally and peripherally with IL-6 at low doses. Intracerebroventricular, but not intraperitoneal IL-6 treatment increased energy expenditure. In conclusion, centrally acting IL-6 exerts anti-obesity effects in rodents.

Therapeutic strategies for the clinical blockade of IL-6/gp130 signaling.

Jürgen Scheller,  Roland S. G. Jones,  Stefan Rose-John … (2011)
The successful treatment of certain autoimmune conditions with the humanized anti-IL-6 receptor (IL-6R) antibody tocilizumab has emphasized the clinical importance of cytokines that signal through the β-receptor subunit glycoprotein 130 (gp130). In this Review, we explore how gp130 signaling controls disease progression and examine why IL-6 has a special role among these cytokines as an inflammatory regulator. Attention will be given to the role of the soluble IL-6R, and we will provide a perspective into the clinical blockade of IL-6 activity in autoimmunity, inflammation, and cancer.

Competing Interests: The authors declare that no competing interest exists.