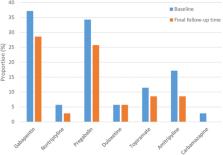 Background: The unique properties of methadone make it attractive for use in cancer pain. The use of very low initial doses of adjunctive methadone is a promising strategy given its simplicity and potentially reduced risk profile.

Objective: To understand if an ultralow-dose (ULD) methadone protocol (1 mg by mouth daily initial dose with gradual titration) can improve pain control in outpatients with cancer-related pain not responsive to previous opioids and/or nonopioid analgesics. We also sought to assess if the use of ULD methadone resulted in improvement in mood and sleep among other outcomes.

Design and Setting/Subjects: This study is a retrospective chart review of outpatients at the cancer pain clinic at the Tom Baker Cancer Centre in Calgary, Alberta, Canada.

Measurements: The mean ratings in maximum and average pain before methadone initiation, and at the final follow-up point are reported. Paired sample t tests evaluate for statistically significant differences in pain ratings before methadone initiation and at final follow-up. We also report the proportion of participants with a subjective improvement in pain, sleep, and mood (dichotomous “yes/no”), and the mean number of weeks to initial documented pain improvement.

Conclusions: More than two-thirds of patients reported an improvement in pain with a protocol using very low initial doses of adjunctive methadone. Our report is a preliminary retrospective chart review and larger prospective trials are warranted.

Do we need a third mechanistic descriptor for chronic pain states?

Switching from morphine to methadone to improve analgesia and tolerability in cancer patients: a prospective study.

P. Villari,  R. Boffi,  Walter Groff … (2001)
To evaluate the clinical benefits of switching from morphine to oral methadone in patients who experience poor analgesia or adverse effects from morphine. Fifty-two consecutive cancer patients receiving oral morphine but with uncontrolled pain and/or moderate to severe opioid adverse effects were switched to oral methadone administered every 8 hours using different dose ratios. Intensity of pain and adverse effects were assessed daily, and the symptom distress score (DS) was calculated before and after switching. Data were analyzed for 50 patients. Switching was considered effective in 80% of the patients; results were achieved in an average of 3.65 days. In the 10 patients who switched to methadone because of uncontrolled pain, a significant reduction in pain intensity (P <.005) and an average of a 33% increase in methadone doses necessary (P <.01) were found after an average of 3.5 days. DS significantly decreased from an average of 8.4 to 4.5 (P <.0005). In the 32 patients switching because of uncontrolled pain and morphine-related adverse effects, significant improvement was found in pain intensity (P <.0005), nausea and vomiting (P <.03), constipation (P <.001), and drowsiness (P <.01), but a significant increase in the methadone dose of an average of 20% (P <.004) was required. In most patients with cancer pain referred for poor pain control and/or adverse effects, switching to oral methadone is a valid therapeutic option. In the clinical setting of poor pain control, higher doses of methadone are necessary with respect to the equianalgesic calculated dose ratios previously published.

Caroline A Arout,  Ellen Edens,  Ismene L Petrakis … (2015)
Opioid analgesics have become a cornerstone in the treatment of moderate to severe pain, resulting in a steady rise of opioid prescriptions. Subsequently, there has been a striking increase in the number of opioid-dependent individuals, opioid-related overdoses, and fatalities. Clinical use of opioids is further complicated by an increasingly deleterious profile of side effects beyond addiction, including tolerance and opioid-induced hyperalgesia (OIH), where OIH is defined as an increased sensitivity to already painful stimuli. This paradoxical state of increased nociception results from acute and long-term exposure to opioids, and appears to develop in a substantial subset of patients using opioids. Recently, there has been considerable interest in developing an efficacious treatment regimen for acute and chronic pain. However, there are currently no well-established treatments for OIH. Several substrates have emerged as potential modulators of OIH, including the N-methyl-D-aspartate and γ-aminobutyric acid receptors, and most notably, the innate neuroimmune system. This review summarizes the neurobiology of OIH in the context of clinical treatment; specifically, we review evidence for several pathways that show promise for the treatment of pain going forward, as prospective adjuvants to opioid analgesics. Overall, we suggest that this paradoxical state be considered an additional target of clinical treatment for chronic pain.

This Open Access article is distributed under the terms of the Creative Commons License ( http://creativecommons.org/licenses/by/4.0), which permits unrestricted use, distribution, and reproduction in any medium, provided the original work is properly cited.