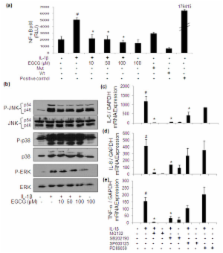 Epigallocatechin-3-gallate (EGCG) is a bioactive polyphenol of green tea and exerts potent anti-inflammatory effects by inhibiting signaling events and gene expression. Interleukin-1beta (IL-1β) is the principal cytokine linked to cartilage degradation in osteoarthritis (OA). The objective of this study was to evaluate the global effect of EGCG on IL-1β-induced expression of proteins associated with OA pathogenesis in human chondrocytes.

Primary OA chondrocytes were pretreated with EGCG (10 to 100 uM) and then stimulated with IL-1β (5 ng/ml) for 24 hours. Culture supernatants were incubated with cytokine antibody arrays and immunoreactive proteins (80 proteins) were visualized by enhanced chemiluminiscence. Effect of EGCG on IL-1β-induced expression of 18 selected genes was verified by Real time-PCR and effect on IL-6, IL-8 and tumor necrosis factor-alpha (TNF-α) production was determined using specific ELISAs. Western immunoblotting was used to analyze the effect of EGCG on the interleukin-1 receptor-associated kinase 1 (IRAK-1) and TNF receptor-associated factor 6 (TRAF-6) proteins in IL-1β-stimulated chondrocytes. The role of nuclear factor kappa-B (NF-κB) and mitogen activated protein kinases (MAPKs) in the regulation of selected genes and the mechanism involved in EGCG mediated modulation of these genes was determined by using specific inhibitors for NF- κB (MG132) and MAPKs (p38-MAPK, SB202190; JNK-MAPK, SP600125, ERK-MAPK, PD98059).

Our results suggest that the potential of EGCG in OA treatment/prevention may be related to its ability to globally suppress the inflammatory response in human chondrocytes. These results identify additional new targets of EGCG and advocate that EGCG may be a potent chondroprotective agent in OA.

The role of cytokines in osteoarthritis pathophysiology.

Ricardo J. Fernandes,  Johanne Martel-Pelletier,  Pierre Pelletier (2001)
Morphological changes observed in OA include cartilage erosion as well as a variable degree of synovial inflammation. Current research attributes these changes to a complex network of biochemical factors, including proteolytic enzymes, that lead to a breakdown of the cartilage macromolecules. Cytokines such as IL-1 and TNF-alpha produced by activated synoviocytes, mononuclear cells or by articular cartilage itself significantly up-regulate metalloproteinases (MMP) gene expression. Cytokines also blunt chondrocyte compensatory synthesis pathways required to restore the integrity of the degraded extrecellular matrix (ECM). Moreover, in OA synovium, a relative deficit in the production of natural antagonists of the IL-1 receptor (IL-1Ra) has been demonstrated, and could possibly be related to an excess production of nitric oxide in OA tissues. This, coupled with an upregulation in the receptor level, has been shown to be an additional enhancer of the catabolic effect of IL-1 in this disease.IL-1 and TNF-alpha significantly up-regulate MMP-3 steady-state mRNA derived from human synovium and chondrocytes. The neutralization of IL-1 and/or TNF-alpha up-regulation of MMP gene expression appears to be a logical development in the potential medical therapy of OA. Indeed, recombinant IL-1receptor antagonists (ILRa) and soluble IL-1 receptor proteins have been tested in both animal models of OA for modification of OA progression. Soluble IL-1Ra suppressed MMP-3 transcription in the rabbit synovial cell line HIG-82. Experimental evidence showing that neutralizing TNF-alpha suppressed cartilage degradation in arthritis also support such strategy. The important role of TNF-alpha in OA may emerge from the fact that human articular chondrocytes from OA cartilage expressed a significantly higher number of the p55 TNF-alpha receptor which could make OA cartilage particularly susceptible to TNF-alpha degradative stimuli. In addition, OA cartilage produces more TNF-alpha and TNF anglealpha convertase enzyme (TACE) mRNA than normal cartilage. By analogy, an inhibitor to the p55 TNF-alpha receptor may also provide a mechanism for abolishing TNF-alpha-induced degradation of cartilage ECM by MMPs. Since TACE is the regulator of TNF-alpha activity, limiting the activity of TACE might also prove efficacious in OA. IL-1 and TNF-alpha inhibition of chondrocyte compensatory biosynthesis pathways which further compromise cartilage repair must also be dealt with, perhaps by employing stimulatory agents such as transforming growth factor-beta or insulin-like growth factor-I. Certain cytokines have antiinflammatory properties. Three such cytokines - IL-4, IL-10, and IL-13 - have been identified as able to modulate various inflammatory processes. Their antiinflammatory potential, however, appears to depend greatly on the target cell. Interleukin-4 (IL-4) has been tested in vitro in OA tissue and has been shown to suppress the synthesis of both TNF-alpha and IL-1beta in the same manner as low-dose dexamethasone. Naturally occurring antiinflammatory cytokines such as IL-10 inhibit the synthesis of IL-1 and TNF-alpha and can be potential targets for therapy in OA. Augmenting inhibitor production in situ by gene therapy or supplementing it by injecting the recombinant protein is an attractive therapeutic target, although an in vivo assay in OA is not available, and its applicability has yet to be proven. Similarly, IL-13 significantly inhibits lipopolysaccharide (LPS)-induced TNF-alpha production by mononuclear cells from peripheral blood, but not in cells from inflamed synovial fluid. IL-13 has important biological activities: inhibition of the production of a wide range of proinflammatory cytokines in monocytes/macrophages, B cells, natural killer cells and endothelial cells, while increasing IL-1Ra production. In OA synovial membranes treated with LPS, IL-13 inhibited the synthesis of IL-1beta, TNF-alpha and stromelysin, while increasing IL-1Ra production.In summary, modulation of cytokines that control MMP gene up-regulation would appear to be fertile targets for drug development in the treatment of OA. Several studies illustrate the potential importance of modulating IL-1 activity as a means to reduce the progression of the structural changes in OA. In the experimental dog and rabbit models of OA, we have demonstrated that in vivo intraarticular injections of the IL-Ra gene can prevent the progression of structural changes in OA. Future directions in the research and treatment of osteoarthritis (OA) will be based on the emerging picture of pathophysiological events that modulate the initiation and progression of OA.

The American College of Rheumatology criteria for the classification and reporting of osteoarthritis of the hip.

W. Daniel Kissling,  Michael D. Feldman,  D Appelrouth … (1991)
Clinical criteria for the classification of patients with hip pain associated with osteoarthritis (OA) were developed through a multicenter study. Data from 201 patients who had experienced hip pain for most days of the prior month were analyzed. The comparison group of patients had other causes of hip pain, such as rheumatoid arthritis or spondylarthropathy. Variables from the medical history, physical examination, laboratory tests, and radiographs were used to develop different sets of criteria to serve different investigative purposes. Multivariate methods included the traditional "number of criteria present" format and "classification tree" techniques. Clinical criteria: A classification tree was developed, without radiographs, for clinical and laboratory criteria or for clinical criteria alone. A patient was classified as having hip OA if pain was present in combination with either 1) hip internal rotation greater than or equal to 15 degrees, pain present on internal rotation of the hip, morning stiffness of the hip for less than or equal to 60 minutes, and age greater than 50 years, or 2) hip internal rotation less than 15 degrees and an erythrocyte sedimentation rate (ESR) less than or equal to 45 mm/hour; if no ESR was obtained, hip flexion less than or equal to 115 degrees was substituted (sensitivity 86%; specificity 75%). Clinical plus radiographic criteria: The traditional format combined pain with at least 2 of the following 3 criteria: osteophytes (femoral or acetabular), joint space narrowing (superior, axial, and/or medial), and ESR less than 20 mm/hour (sensitivity 89%; specificity 91%). The radiographic presence of osteophytes best separated OA patients and controls by the classification tree method (sensitivity 89%; specificity 91%). The "number of criteria present" format yielded criteria and levels of sensitivity and specificity similar to those of the classification tree for the combined clinical and radiographic criteria set. For the clinical criteria set, the classification tree provided much greater specificity. The value of the radiographic presence of an osteophyte in separating patients with OA of the hip from those with hip pain of other causes is emphasized.

The role of the chondrocyte in osteoarthritis.