Fitness of Herbicide-Resistant Weeds: Current Knowledge and Implications for Management 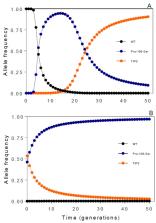 Direct and ecological costs of resistance to herbivory

Deciphering the evolution of herbicide resistance in weeds.

Valérie Le Morvan,  Marie Jasieniuk,  Christophe Délye (2013)
Resistance to herbicides in arable weeds is increasing rapidly worldwide and threatening global food security. Resistance has now been reported to all major herbicide modes of action despite the development of resistance management strategies in the 1990s. We review here recent advances in understanding the genetic bases and evolutionary drivers of herbicide resistance that highlight the complex nature of selection for this adaptive trait. Whereas early studied cases of resistance were highly herbicide-specific and largely under monogenic control, cases of greatest concern today generally involve resistance to multiple modes of action, are under polygenic control, and are derived from pre-existing stress response pathways. Although 'omics' approaches should enable unraveling the genetic bases of complex resistances, the appearance, selection, and spread of herbicide resistance in weed populations can only be fully elucidated by focusing on evolutionary dynamics and implementing integrative modeling efforts. Copyright © 2013 Elsevier Ltd. All rights reserved.

Robert Sammons,  Todd Gaines (2014)
Studies of mechanisms of resistance to glyphosate have increased current understanding of herbicide resistance mechanisms. Thus far, single-codon non-synonymous mutations of EPSPS (5-enolypyruvylshikimate-3-phosphate synthase) have been rare and, relative to other herbicide mode of action target-site mutations, unconventionally weak in magnitude for resistance to glyphosate. However, it is possible that weeds will emerge with non-synonymous mutations of two codons of EPSPS to produce an enzyme endowing greater resistance to glyphosate. Today, target-gene duplication is a common glyphosate resistance mechanism and could become a fundamental process for developing any resistance trait. Based on competition and substrate selectivity studies in several species, rapid vacuole sequestration of glyphosate occurs via a transporter mechanism. Conversely, as the chloroplast requires transporters for uptake of important metabolites, transporters associated with the two plastid membranes may separately, or together, successfully block glyphosate delivery. A model based on finite glyphosate dose and limiting time required for chloroplast loading sets the stage for understanding how uniquely different mechanisms can contribute to overall glyphosate resistance.