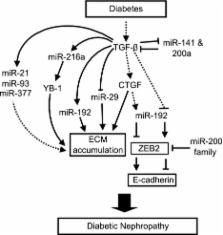 Rhonda L. Feinbaum,  V Ambros,  R Feinbaum … (1993)
lin-4 is essential for the normal temporal control of diverse postembryonic developmental events in C. elegans. lin-4 acts by negatively regulating the level of LIN-14 protein, creating a temporal decrease in LIN-14 protein starting in the first larval stage (L1). We have cloned the C. elegans lin-4 locus by chromosomal walking and transformation rescue. We used the C. elegans clone to isolate the gene from three other Caenorhabditis species; all four Caenorhabditis clones functionally rescue the lin-4 null allele of C. elegans. Comparison of the lin-4 genomic sequence from these four species and site-directed mutagenesis of potential open reading frames indicated that lin-4 does not encode a protein. Two small lin-4 transcripts of approximately 22 and 61 nt were identified in C. elegans and found to contain sequences complementary to a repeated sequence element in the 3' untranslated region (UTR) of lin-14 mRNA, suggesting that lin-4 regulates lin-14 translation via an antisense RNA-RNA interaction.

Peter M. Brownlee (2001)
Diabetes-specific microvascular disease is a leading cause of blindness, renal failure and nerve damage, and diabetes-accelerated atherosclerosis leads to increased risk of myocardial infarction, stroke and limb amputation. Four main molecular mechanisms have been implicated in glucose-mediated vascular damage. All seem to reflect a single hyperglycaemia-induced process of overproduction of superoxide by the mitochondrial electron-transport chain. This integrating paradigm provides a new conceptual framework for future research and drug discovery.

The miR-200 family and miR-205 regulate epithelial to mesenchymal transition by targeting ZEB1 and SIP1.