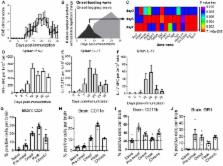 There is an urgent need in multiple sclerosis (MS) patients to develop biomarkers and laboratory tests to improve early diagnosis, predict clinical relapses, and optimize treatment responses. In healthy individuals, the transport of proteins across the blood–brain barrier (BBB) is tightly regulated, whereas, in MS, central nervous system (CNS) inflammation results in damage to neuronal tissues, disruption of BBB integrity, and potential release of neuroinflammatory disease-induced CNS proteins (NDICPs) into CSF and serum. Therefore, changes in serum NDICP abundance could serve as biomarkers of MS. Here, we sought to determine if changes in serum NDICPs are detectable prior to clinical onset of experimental autoimmune encephalomyelitis (EAE) and, therefore, enable prediction of disease onset. Importantly, we show in longitudinal serum specimens from individual mice with EAE that pre-onset expression waves of synapsin-2, glutamine synthetase, enolase-2, and synaptotagmin-1 enable the prediction of clinical disease with high sensitivity and specificity. Moreover, we observed differences in serum NDICPs between active and passive immunization in EAE, suggesting hitherto not appreciated differences for disease induction mechanisms. Our studies provide the first evidence for enabling the prediction of clinical disease using serum NDICPs. The results provide proof-of-concept for the development of high-confidence serum NDICP expression waves and protein biomarker candidates for MS.

Alireza Minagar, J. Steven Alexander (2003)
The blood-brain barrier (BBB) is a complex organization of cerebral endothelial cells (CEC), pericytes and their basal lamina, which are surrounded and supported by astrocytes and perivascular macrophages. Collectively these cells separate and form the compartments of the cerebral vascular space and the cerebral interstitium under normal conditions. Without the BBB, the 'interior milieu' of the central nervous system (CNS) would be flooded by humoral neurotransmitters and formed blood elements that upset normal CNS functions and lead to vascular/neural injury. Dysregulation of the BBB and transendothelial migration of activated leukocytes are among the earliest cerebrovascular abnormalities seen in multiple sclerosis (MS) brains and parallel the release of inflammatory cytokines/chemokines. Mechanisms for breakdown of the BBB in MS are incompletely understood, but appear to involve direct effects of these cytokines/ chemokines on endothelial regulation of BBB components, as well as indirect cytokine/chemokine-dependent leukocyte mediated injury. Unique endothelial structural features of the BBB include highly organized endothelial tight junctions, the absence of class II major histocompatibility complex, abundant mitochondria and a highly developed transport system in CEC. Exposure of endothelium to proinflammatory cytokines (IFN-gamma, TNF-alpha and IL-1beta) interrupts the BBB by disorganizing cell-cell junctions, decreases the brain solute barrier, enhances leukocyte endothelial adhesion and migration as well as increases expression of class II MHC and promotes shedding of endothelial 'microparticles' (EMP). In this review we examine interactions between cytokines/chemokines, activated leukocytes, adhesion molecules and activated CEC in the pathogenesis of BBB failure in MS.

Specialty section: This article was submitted to Multiple Sclerosis and Neuroimmunology, a section of the journal Frontiers in Immunology