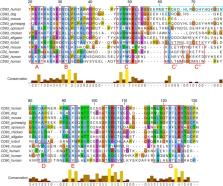 The CD83 molecule has been identified to be expressed on numerous activated immune cells, including B and T lymphocytes, monocytes, dendritic cells, microglia, and neutrophils. Both isoforms of CD83, the membrane-bound as well as its soluble form are topic of intensive research investigations. Several studies revealed that CD83 is not a typical co-stimulatory molecule, but rather plays a critical role in controlling and resolving immune responses. Moreover, CD83 is an essential factor during the differentiation of T and B lymphocytes, and the development and maintenance of tolerance. The identification of its interaction partners as well as signaling pathways have been an enigma for the last decades. Here, we report the latest data on the expression, structure, and the signaling partners of CD83. In addition, we review the regulatory functions of CD83, including its striking modulatory potential to maintain the balance between tolerance versus inflammation during homeostasis or pathologies. These immunomodulatory properties of CD83 emphasize its exceptional therapeutic potential, which has been documented in specific preclinical disease models.

MHC class II stabilization at the surface of human dendritic cells is the result of maturation-dependent MARCH I down-regulation.

Voahirana Camosseto,  Evelina Gatti,  Maurizio Ceppi … (2008)
In response to Toll-like receptor ligands, dendritic cells (DCs) dramatically enhance their antigen presentation capacity by stabilizing at the cell-surface MHC II molecules. We demonstrate here that, in human monocyte-derived DCs, the RING-CH ubiquitin E3 ligase, membrane-associated RING-CH I (MARCH I), promotes the ubiquitination of the HLA-DR beta-chain. Thus, in nonactivated DCs, MARCH I induces the surface internalization of mature HLA-DR complexes, therefore reducing their stability and levels. We further demonstrate that the maturation-dependent down-regulation of MARCH I is a key event in MHC class II up-regulation at the surface of LPS-activated DCs. MARCH I is, therefore, a major regulator of HLA-DR traffic, and its loss contributes to the acquisition of the potent immunostimulatory properties of mature human DCs.

Gene P. Siegal,  Angelika Golebiowska,  Christine Trumpfheller … (2004)
Dendritic cells (DCs) undergo maturation during virus infection and thereby become potent stimulators of cell-mediated immunity. HIV-1 replicates in immature DCs, but we now find that infection is not accompanied by many components of maturation in either infected cells or uninfected bystanders. The infected cultures do not develop potent stimulating activity for the mixed leukocyte reaction (MLR), and the DCs producing HIV-1 gag p24 do not express CD83 and DC-lysosome-associated membrane protein maturation markers. If different maturation stimuli are applied to DCs infected with HIV-1, the infected cells selectively fail to mature. When DCs from HIV-1-infected patients are infected and cultured with autologous T cells, IL-10 was produced in 6 of 10 patients. These DC-T cell cocultures could suppress another immune response, the MLR. The regulation was partially IL-10-dependent and correlated in extent with the level of IL-10 produced. Suppressor cells only developed from infected patients, rather than healthy controls, and the DCs had to be exposed to live virus rather than HIV-1 gag peptides or protein. These results indicate that HIV-1-infected DCs have two previously unrecognized means to evade immune responses: maturation can be blocked reducing the efficacy of antigen presentation from infected cells, and T cell-dependent suppression can be induced.

This article was submitted to Immunological Tolerance and Regulation, a section of the journal Frontiers in Immunology