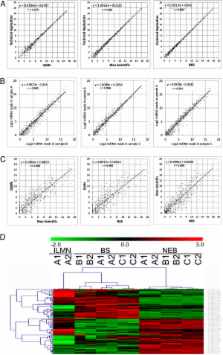 From the 14 size-selected sequencing libraries, we obtained a total of 101.8 million raw single-end reads, an average of about 7.27 million reads per library. Sequence analysis showed that there was a diverse collection of the exosomal RNA species among which microRNAs (miRNAs) were the most abundant, making up over 42.32% of all raw reads and 76.20% of all mappable reads. At the current read depth, 593 miRNAs were detectable. The five most common miRNAs (miR-99a-5p, miR-128, miR-124-3p, miR-22-3p, and miR-99b-5p) collectively accounted for 48.99% of all mappable miRNA sequences. MiRNA target gene enrichment analysis suggested that the highly abundant miRNAs may play an important role in biological functions such as protein phosphorylation, RNA splicing, chromosomal abnormality, and angiogenesis. From the unknown RNA sequences, we predicted 185 potential miRNA candidates. Furthermore, we detected significant fractions of other RNA species including ribosomal RNA (9.16% of all mappable counts), long non-coding RNA (3.36%), piwi-interacting RNA (1.31%), transfer RNA (1.24%), small nuclear RNA (0.18%), and small nucleolar RNA (0.01%); fragments of coding sequence (1.36%), 5 ′ untranslated region (0.21%), and 3 ′ untranslated region (0.54%) were also present. In addition to the RNA composition of the libraries, we found that the three tested commercial kits generated a sufficient number of DNA fragments for sequencing but each had significant bias toward capturing specific RNAs.

This study demonstrated that a wide variety of RNA species are embedded in the circulating vesicles. To our knowledge, this is the first report that applied deep sequencing to discover and characterize profiles of plasma-derived exosomal RNAs. Further characterization of these extracellular RNAs in diverse human populations will provide reference profiles and open new doors for the development of blood-based biomarkers for human diseases.

Guilherme Rabinowits,  D. Taylor,  Ryan Day … (2008)
To date, there is no screening test for lung cancer shown to affect overall mortality. MicroRNAs (miRNAs) are a class of small noncoding RNA genes found to be abnormally expressed in several types of cancer, suggesting a role in the pathogenesis of human cancer. We evaluated the circulating levels of tumor exosomes, exosomal small RNA, and specific exosomal miRNAs in patients with and without lung adenocarcinoma, correlating the levels with the American Joint Committee on Cancer (AJCC) disease stage to validate it as an acceptable marker for diagnosis and prognosis in patients with adenocarcinoma of the lung. To date, 27 patients with lung adenocarcinoma AJCC stages I-IV and 9 controls, all aged 21-80 years, were enrolled in the study. Small RNA was detected in the circulating exosomes. The mean exosome concentration was 2.85 mg/mL (95% CI, 1.94-3.76) for the lung adenocarcinoma group versus 0.77 mg/mL (95% CI, 0.68-0.86) for the control group (P < .001). The mean miRNA concentration was 158.6 ng/mL (95% CI, 145.7-171.5) for the lung adenocarcinoma group versus 68.1 ng/mL (95% CI, 57.2-78.9) for the control group (P < .001). Comparisons between peripheral circulation miRNA-derived exosomes and miRNA-derived tumors indicated that the miRNA signatures were not significantly different. The significant difference in total exosome and miRNA levels between lung cancer patients and controls, and the similarity between the circulating exosomal miRNA and the tumor-derived miRNA patterns, suggest that circulating exosomal miRNA might be useful as a screening test for lung adenocarcinoma. No correlation between the exosomal miRNA levels and the stage of disease can be made at this point.

miRDB: a microRNA target prediction and functional annotation database with a wiki interface.

Xiaowei Wang (2008)
MicroRNAs (miRNAs) are short noncoding RNAs that are involved in the regulation of thousands of gene targets. Recent studies indicate that miRNAs are likely to be master regulators of many important biological processes. Due to their functional importance, miRNAs are under intense study at present, and many studies have been published in recent years on miRNA functional characterization. The rapid accumulation of miRNA knowledge makes it challenging to properly organize and present miRNA function data. Although several miRNA functional databases have been developed recently, this remains a major bioinformatics challenge to miRNA research community. Here, we describe a new online database system, miRDB, on miRNA target prediction and functional annotation. Flexible web search interface was developed for the retrieval of target prediction results, which were generated with a new bioinformatics algorithm we developed recently. Unlike most other miRNA databases, miRNA functional annotations in miRDB are presented with a primary focus on mature miRNAs, which are the functional carriers of miRNA-mediated gene expression regulation. In addition, a wiki editing interface was established to allow anyone with Internet access to make contributions on miRNA functional annotation. This is a new attempt to develop an interactive community-annotated miRNA functional catalog. All data stored in miRDB are freely accessible at http://mirdb.org.