A Nomenclature for Vertebral Fossae in Sauropods and Other Saurischian Dinosaurs 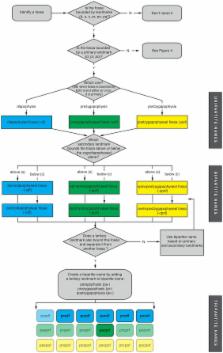 The axial skeleton of extinct saurischian dinosaurs (i.e., theropods, sauropodomorphs), like living birds, was pneumatized by epithelial outpocketings of the respiratory system. Pneumatic signatures in the vertebral column of fossil saurischians include complex branching chambers within the bone (internal pneumaticity) and large chambers visible externally that are bounded by neural arch laminae (external pneumaticity). Although general aspects of internal pneumaticity are synapomorphic for saurischian subgroups, the individual internal pneumatic spaces cannot be homologized across species or even along the vertebral column, due to their variability and absence of topographical landmarks. External pneumatic structures, in contrast, are defined by ready topological landmarks (vertebral laminae), but no consistent nomenclatural system exists. This deficiency has fostered confusion and limited their use as character data in phylogenetic analysis.

We present a simple system for naming external neural arch fossae that parallels the one developed for the vertebral laminae that bound them. The nomenclatural system identifies fossae by pointing to reference landmarks (e.g., neural spine, centrum, costal articulations, zygapophyses). We standardize the naming process by creating tripartite names from “primary landmarks,” which form the zygodiapophyseal table, “secondary landmarks,” which orient with respect to that table, and “tertiary landmarks,” which further delineate a given fossa.

The proposed nomenclatural system for lamina-bounded fossae adds clarity to descriptions of complex vertebrae and allows these structures to be sourced as character data for phylogenetic analyses. These anatomical terms denote potentially homologous pneumatic structures within Saurischia, but they could be applied to any vertebrate with vertebral laminae that enclose spaces, regardless of their developmental origin or phylogenetic distribution.

Clara Varricchio,  Rosalind Sadleir,  Deborah Sidor … (1999)
Lower Cretaceous fossils from central Niger document the succession of sauropod dinosaurs on Africa as it drifted into geographic isolation. A new broad-toothed genus of Neocomian age ( approximately 135 million years ago) shows few of the specializations of other Cretaceous sauropods. A new small-bodied sauropod of Aptian-Albian age ( approximately 110 million years ago), in contrast, reveals the highly modified cranial form of rebbachisaurid diplodocoids. Rates of skeletal change in sauropods and other major groups of dinosaurs are estimated quantitatively and shown to be highly variable.

The last of the dinosaur titans: a new sauropod from Madagascar.

K Curry,  Samuel Forster (2001)
The Titanosauria, the last surviving group of the giant sauropod dinosaurs, attained a near-global distribution by the close of the Cretaceous period (65 Myr ago). With the exception of a few new discoveries in Argentina, most titanosaurs are known only from fragmentary postcranial skeletons and rare, isolated skull elements. Here we describe the most complete titanosaur yet discovered. Rapetosaurus krausei gen. et sp. nov., from the Maevarano Formation of Madagascar, provides a view of titanosaur anatomy from head to tail. A total-evidence phylogenetic analysis supports a close relationship between brachiosaurids and titanosaurs (Titanosauriformes). The inclusion of cranial data from Rapetosaurus also lays to rest questions concerning the phylogeny of the enigmatic Mongolian genera Nemegtosaurus and Quaesitosaurus. In spite of their elongated, diplodocoid-like skulls, all three taxa are now firmly nested within Titanosauria.

Paul C. Sereno,  Ricardo N Martínez,  Jeffrey Wilson … (2008)
Background Living birds possess a unique heterogeneous pulmonary system composed of a rigid, dorsally-anchored lung and several compliant air sacs that operate as bellows, driving inspired air through the lung. Evidence from the fossil record for the origin and evolution of this system is extremely limited, because lungs do not fossilize and because the bellow-like air sacs in living birds only rarely penetrate (pneumatize) skeletal bone and thus leave a record of their presence. Methodology/Principal Findings We describe a new predatory dinosaur from Upper Cretaceous rocks in Argentina, Aerosteon riocoloradensis gen. et sp. nov., that exhibits extreme pneumatization of skeletal bone, including pneumatic hollowing of the furcula and ilium. In living birds, these two bones are pneumatized by diverticulae of air sacs (clavicular, abdominal) that are involved in pulmonary ventilation. We also describe several pneumatized gastralia (“stomach ribs”), which suggest that diverticulae of the air sac system were present in surface tissues of the thorax. Conclusions/Significance We present a four-phase model for the evolution of avian air sacs and costosternal-driven lung ventilation based on the known fossil record of theropod dinosaurs and osteological correlates in extant birds: (1) Phase I—Elaboration of paraxial cervical air sacs in basal theropods no later than the earliest Late Triassic. (2) Phase II—Differentiation of avian ventilatory air sacs, including both cranial (clavicular air sac) and caudal (abdominal air sac) divisions, in basal tetanurans during the Jurassic. A heterogeneous respiratory tract with compliant air sacs, in turn, suggests the presence of rigid, dorsally attached lungs with flow-through ventilation. (3) Phase III—Evolution of a primitive costosternal pump in maniraptoriform theropods before the close of the Jurassic. (4) Phase IV—Evolution of an advanced costosternal pump in maniraptoran theropods before the close of the Jurassic. In addition, we conclude: (5) The advent of avian unidirectional lung ventilation is not possible to pinpoint, as osteological correlates have yet to be identified for uni- or bidirectional lung ventilation. (6) The origin and evolution of avian air sacs may have been driven by one or more of the following three factors: flow-through lung ventilation, locomotory balance, and/or thermal regulation.