An examination of college student wellness: A research and liberal arts perspective 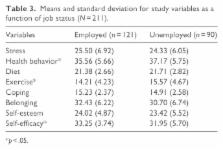 Do we really know what makes us happy? A review of the economic literature on the factors associated with subjective well-being

Why do women opt out? Sense of belonging and women's representation in mathematics.

What do men want? Gender differences and two spheres of belongingness: comment on Cross and Madson (1997)

Roy Baumeister,  Kristin Sommer (1997)
In response to S. E. Cross and L. Madson's (1997) suggestion that men's behaviors reflect a desire for independence and separateness, the authors propose that those same behaviors are designed to form connections with other people but in a broader social sphere. Women's sociality is oriented toward dyadic close relationships, whereas men's sociality is oriented toward a larger group. Gender differences in aggression, helping behavior, desire for power, uniqueness, self-representations, interpersonal behavior, and intimacy fit this view.