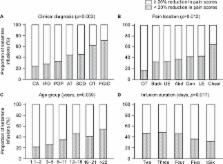 Subanesthetic doses of ketamine, an N-methyl- d-aspartate receptor antagonist used as an adjuvant to opioid for the treatment of pain in adults with acute and chronic pain, have been shown, in some instances, to improve pain intensity and to decrease opioid intake. However, less is known about the role of ketamine in pain management in children, adolescents, and young adults.

We examined the effects of subanesthetic ketamine on pain intensity and opioid intake in children, adolescents, and young adults with acute and chronic pain syndromes treated in an inpatient setting.

This is a longitudinal cohort study of patients treated with subanesthetic ketamine infusions in regular patient care units in a tertiary pediatric hospital. Primary outcomes included changes in pain scores and morphine-equivalent intake.

The study cohort included 230 different patients who during 360 separate hospital admissions received subanesthetic ketamine infusions for pain management. Overall, ketamine infusions were associated with significant reductions in mean pain scores from baseline (mean pain scores 6.64 [95% CI: 6.38–6.90]) to those recorded on the day after discontinuation of ketamine (mean pain scores 4.38 [95% CI: 4.06–4.69]), p<0.001. Importantly, the effect of ketamine on pain scores varied according to clinical diagnosis ( p=0.011), infusion duration ( p=0.004), and pain location ( p=0.004). Interestingly, greater reductions in pain scores were observed in patients with cancer pain and patients with pain associated with pancreatitis and Crohn’s disease. There were no records of psychotomimetic side effects requiring therapy.

These data suggest that administration of subanesthetic ketamine for pain management is feasible and safe in regular inpatient care units and may benefit children, adolescents, and young adults with acute and chronic pain. This study is informative and can be helpful in determining sample and effect sizes when planning clinical trials to determine the role of subanesthetic ketamine infusions for pain management in pediatric patients.

A randomized add-on trial of an N-methyl-D-aspartate antagonist in treatment-resistant bipolar depression.

Lobna Ibrahim,  Giacomo Salvadore,  David Luckenbaugh … (2010)
Existing therapies for bipolar depression have a considerable lag of onset of action. Pharmacological strategies that produce rapid antidepressant effects-for instance, within a few hours or days-would have an enormous impact on patient care and public health. To determine whether an N-methyl-D-aspartate-receptor antagonist produces rapid antidepressant effects in subjects with bipolar depression. A randomized, placebo-controlled, double-blind, crossover, add-on study conducted from October 2006 to June 2009. Mood Disorders Research Unit at the National Institute of Mental Health, Bethesda, Maryland. Patients Eighteen subjects with DSM-IV bipolar depression (treatment-resistant). Subjects maintained at therapeutic levels of lithium or valproate received an intravenous infusion of either ketamine hydrochloride (0.5 mg/kg) or placebo on 2 test days 2 weeks apart. The Montgomery-Asberg Depression Rating Scale was used to rate subjects at baseline and at 40, 80, 110, and 230 minutes and on days 1, 2, 3, 7, 10, and 14 postinfusion. Change in Montgomery-Asberg Depression Rating Scale primary efficacy measure scores. Within 40 minutes, depressive symptoms significantly improved in subjects receiving ketamine compared with placebo (d = 0.52, 95% confidence interval [CI], 0.28-0.76); this improvement remained significant through day 3. The drug difference effect size was largest at day 2 (d = 0.80, 95% CI, 0.55-1.04). Seventy-one percent of subjects responded to ketamine and 6% responded to placebo at some point during the trial. One subject receiving ketamine and 1 receiving placebo developed manic symptoms. Ketamine was generally well tolerated; the most common adverse effect was dissociative symptoms, only at the 40-minute point. In patients with treatment-resistant bipolar depression, robust and rapid antidepressant effects resulted from a single intravenous dose of an N-methyl-D-aspartate antagonist.

Meredith Berry,  Joshua Burton,  D. L. Lodge … (1983)
The interaction of two dissociative anaesthetics, ketamine and phencyclidine, with the responses of spinal neurones to the electrophoretic administration of amino acids and acetylcholine was studied in decerebrate or pentobarbitone-anaesthetized cats and rats. Both ketamine and phencyclidine selectively blocked excitation by N-methyl-aspartate (NMA) with little effect on excitation by quisqualate and kainate. Ketamine reduced responses to L-aspartate somewhat more than those of L-glutamate; the sensitivity of responses to these two putative transmitters was between that to NMA on one hand and that to quisqualate or kainate on the other. On Renshaw cells, ketamine and phencyclidine reduced responses to acetylcholine less than those to NMA but more than those to quisqualate or kainate. Dorsal root-evoked synaptic excitation of Renshaw cells was reduced to a greater extent than that following ventral root excitation. Intravenous ketamine, 2.5-20 mg/kg, and phencyclidine, 0.2-0.5 mg/kg, also selectively blocked excitation of neurones by NMA. Ketamine showed no consistent or selective effect on inhibition of spinal neurones by electrophoretically administered glycine or gamma-aminobutyricacid (GABA). The results suggest that reduction of synaptic excitation mediated via NMA receptors contributes to the anaesthetic/analgesic properties of these two dissociative anaesthetics.

A systematic review of intravenous ketamine for postoperative analgesia.

Kevin Laskowski,  Catrina Stirling,  Wai H. Lim … (2011)
Perioperative intravenous ketamine may be a useful addition in pain management regimens. Previous systematic reviews have included all methods of ketamine administration, and heterogeneity between studies has been substantial. This study addresses this issue by narrowing the inclusion criteria, using a random effects model, and performing subgroup analysis to determine the specific types of patients, surgery, and clinical indications which may benefit from perioperative ketamine administration. We included published studies from 1966 to 2010 which were randomized, double-blinded, and placebo-controlled using intravenous ketamine (bolus or infusion) to decrease postoperative pain. Studies using any form of regional anesthesia were excluded. No limitation was placed on the ketamine dose, patient age, or language of publication. Ninety-one comparisons in seventy studies involving 4,701 patients met the inclusion criteria (2,652 in ketamine groups and 2,049 in placebo groups). Forty-seven of these studies were appropriate for evaluation in the core meta-analysis, and the remaining 23 studies were used to corroborate the results. A reduction in total opioid consumption and an increase in the time to first analgesic were observed across all studies (P < 0.001). The greatest efficacy was found for thoracic, upper abdominal, and major orthopedic surgical subgroups. Despite using less opioid, 25 out of 32 treatment groups (78%) experienced less pain than the placebo groups at some point postoperatively when ketamine was efficacious. This finding implies an improved quality of pain control in addition to decreased opioid consumption. Hallucinations and nightmares were more common with ketamine but sedation was not. When ketamine was efficacious for pain, postoperative nausea and vomiting was less frequent in the ketamine group. The dose-dependent role of ketamine analgesia could not be determined. Intravenous ketamine is an effective adjunct for postoperative analgesia. Particular benefit was observed in painful procedures, including upper abdominal, thoracic, and major orthopedic surgeries. The analgesic effect of ketamine was independent of the type of intraoperative opioid administered, timing of ketamine administration, and ketamine dose.